Naturally I haven’t yet seen a movie that is still filming and I don’t read the current incarnation of the Suicide Squad comic book, but after seeing the cast in costume for DC’s upcoming Suicide Squad live-action movie — courtesy of director David Ayers — I’m glad this team’s mission is to commit suicide. 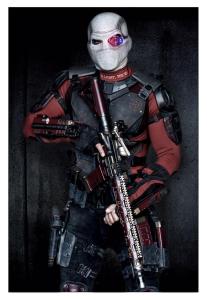 Looks to me like costume designer Kate Hawley was allowed to spend no more than $100 per character — and devoted most of that to draping junk on Smith (check him out wearing his mask at left). I would suggest that little thought or effort went into these designs, but rethinking it, I decided that Hawley had to work very hard to come up with costumes this bad! I don’t like anyone’s look.

But look on the bright side: If the characters are killed off, there won’t be a sequel with these ugly folks.