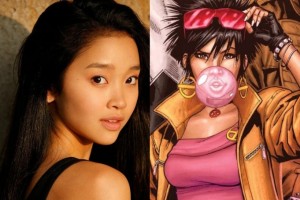 Director Bryan Singer used his Instagram (as usual) to announce that Lana Condor has been cast as Jubilee in X-Men: Apocalypse.

Condor is the definition of a Hollywood newcomer, with no known TV or film credits. Jubilee has appeared in cameos in previous X-Men films. She was played by Katrina Florece in X-Men (2000) and Kea Wong in X2: X-Men United (2003) X-Men: The Last Stand (2006).

Created by Chris Claremont and Marc Silvestri, Jubilee first appeared in 1989’s Uncanny X-Men #244, and was a mainstay in the 1990s animated series.
END_OF_DOCUMENT_TOKEN_TO_BE_REPLACED

We all know that product placement is here to stay, as are “the official whatever of whoever” sponsorships. We live with it. But here is a benefit of the advertising partnership: sometimes we get to see cool new footage in the commercials, as is the case with Audi and Avengers: Age of Ultron.

A:AoU opens May 1. I presume Audis are available now at your local dealerships.