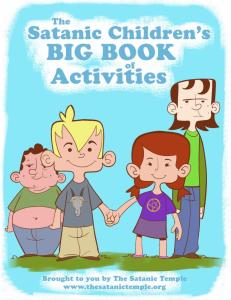 Meet the newest hero of the First Amendment: a coloring book.

The children’s amusement book was balanced against the Bible in a pitched battle in Florida’s Orange County school district — and made the book some consider holy back down.

In honor of Religious Freedom Day in January, the school district had regularly allowed the Christian group World Changers to distribute Bibles to students. (The board allowed the Central Florida Freethought Community to hand out atheist materials last year after the group won a lawsuit.) But when The Satanic Temple wanted to hand out coloring books, the school district delayed Religious Freedom Day in order to rethink its policy.

The Satanic Temple argued that the school district could not allow one religion to distribute materials but another, because that would amount to an official endorsement, which is forbidden by the U.S. Constitution. The Temple pointed to the Supreme Court ruling in Lamb’s Chapel v. Center Moriches Union Free School District — which held that an evangelical church must be given equal access to school facilities — that “the First Amendment forbids the government to regulate speech in ways that favor some viewpoints or ideas at the expense of others.”

On Feb. 10, the board decided to ban the distribution of all materials from outside sources that are “religious, political or sectarian.”

“Frankly, I think, myself, that it was a mistake that we ever let World Changers distribute Bibles in our schools,” school board chair Bob Sublette said at the Feb. 10 board meeting.

David Williamson, with the Freedom From Religion Foundation, declared the decision a “victory for Orange County students,” telling the Orlando Sentinel newspaper, “We don’t want our schools to become religious battlefields. We’ve advocated all along to close the forum.”

“It is not the School Board’s job to promote religion of any kind,” Warren Geltch of Orlando told the Sentinel.

“The message we’re putting forward is tolerance and personal liberty,” the organizer of the local Satanic Temple chapter who goes by the name Tabitha Burns out of concerns for her safety, said to the Sentinel.

You can download your own .pdf of the activity book here and get to colorin’ right away! It’s what the Founding Fathers would want you to do.