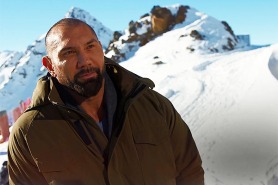 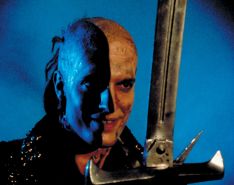 But if it must be done, it has to be done right. With respect.

Director Cedric Nicolas-Troyan is off to a good start by making an excellent casting decision for the Big Bad. Dave Bautista, better known as Drax the Destroyer from last summer’s epic Guardians of the Galaxy, has signed on to play the Kurgan, the menacing barbarian baddie who challenges hero Connor MacLeod.

Clancy Brown made an indelible impression in the original with his imposing size and gravelly, groaning voice, so Bautista has his work cut out for him.

The film will once again center on a group of characters who are immortal — unless decapitated — who have been battling each other with swords down through the centuries, whittling down their numbers until there is only one left. That victor will receive the mysterious Prize.

The key roles of the title Scottish Highlander, Connor (originally played by Christopher Lambert), and his mentor, Ramirez, remain uncast. Ryan Reynolds had been attached to star, but (thankfully) has exited. A rumor popped up last November that Tom Cruise was interested in Ramirez, first played by Sean Connery, but nothing has come of it. Frankly, I think there’s no way this production is going to beat the gonzo casting of the original, which featured a Frenchman playing a Scotsman, and a Scotsman playing an Egyptian pretending to be a Spaniard!

The Man With the Iron Fists

Bautista is cashing in on his Guardians breakout role, landing the plum part of evil enforcer Mr. Hinx in the next James Bond movie, Spectre, but I first noticed him in the RZA‘s China-set martial-arts fairy tale, The Man With the Iron Fists (2012), in which he played the impervious baddie Brass Body — a mostly silent part. He was truly bestial and menacing. Russell Crowe also starred in the film as Jack Knife, a debauched anti-hero with a tricked-out knife/gun. Wu-Tang Clan‘s RZA played a humble blacksmith named Thaddeus who dons the metal mitts after his own hands are brutally amputated. RZA also directed and (of course) contributed to the score!

If you liked the over-the-top ultra-violence of the Kill Bill films, take a look at The Man With the Iron Fists. It’s not great, but it’s a fun attempt to pay homage to the old grindhouse films.