Based on the novel by Thomas Pynchon, Inherent Vice is the latest film from Paul Thomas Anderson (of Boogie Nights and Magnolia fame), and it opens wide today, after premiering in New York and Los Angeles on Dec. 12 in order to qualify for the Oscars.

If there were an Oscar for casting, this movie might get it. The stars include: Joaquin Phoenix, Katherine Waterston, Reese Witherspoon, Owen Wilson, Benicio Del Toro, Jena Malone, Martin Short, Eric Roberts and Josh Brolin.

The trippy plot is sort of about private eye Doc Sportello’s (Phoenix) ex-old lady (Waterston) suddenly appearing out of nowhere with a story about her current billionaire land developer boyfriend (Roberts) and a plot by his wife and her boyfriend to kidnap that same billionaire and throw him in a looney bin.

Warner Bros. decided to allow the flick some creative freedom in promotion, resulting in a slew of visually striking posters, including quite a few showcasing individual characters. (Sadly, my fave, Jena Malone, didn’t get her own poster…) They are worth checking out: 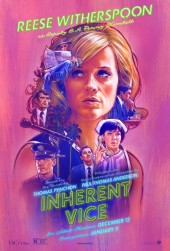 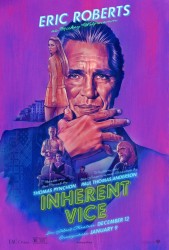 Apparently the film earns it hard R rating thanks to “drug use throughout, sexual content, graphic nudity, language and some violence,” according to the MPAA.

You can find out more at the movie’s official site, as well as P.T. Anderson’s own site.