Finally, some exposition! Finally, we get to learn a little bit about what has been happening. And, finally, some of my suspicions have been confirmed. See, it really isn’t all that hard to explain to the audience what is happening, INTRUDERS; all your mystery is not gone. In fact, we have new ones.

As the show was hinting, Richard Shepherd has been working off the books on the Marcus/Madison case – we just had no idea how far off the books he’s been working! Marcus asked him to shepherd him and bring him back when the time is right – so “shepherding” appears to be a different step than merely bringing someone back.

Combining this with what happened early in the premiere, it seems shepherding might entail getting the “resident” soul out of the way so the new soul can take over. Or something like that… Not killing the Madison identity was betraying Marcus, it would seem.

And we got a hint about why Jack “used to be a cop” down in Los Angeles. His story could potentially be very interesting in light of today’s people vs. police mentality. Is Jack a drunk? Is he really the hero of this story, or just the main protagonist?

On the road to Seattle, Karen (Rukiya Bernard) has an attack of conscience about taking Madison (Millie Brown) with her. She finds Madison’s 9 card and dials the number at a rest stop, connecting with Shepherd (James Frain) and revealing their location. Madison catches her, and kills Karen in the ladies room. On the road from Seattle, Jack (John Simm) plays jazz and recalls happier times – and creepier times – with Amy (Mira Sorvino). He switches to rock music, “Time Has Come Today.” In his car, Shepherd is listening to the same song, which triggers a memory of meeting with Marcus (Connor Dunn), who bribes him not to kill him on orders of “the Nine.” Marcus asks that, after the others kill him, he “shepherd me off the books, and when it’s time, bring me back. They’ll never see me coming.” Marcus wants to take over the Nine, and will reward Shepherd. 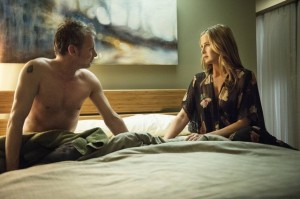 Jack returns Brud’s car, then goes home to find Amy in bed. He quizzes her about the phone and her not being at her usual hotel, and tells her he talked to her boss. Amy freaks out, but then apologizes for worrying him by disappearing. “All you need to know, is I would never leave you. I need you. You’re my shepherd.” She hints that there’s more, but flees the room to put on that jazz music and go outside to make a mysterious phone call. When Amy asks to separate, saying she needs to become who she’s meant to be, Jack punches a glass door and cuts his hand. When he calms down, they seem near a detente until, at the mention of death, she says, “We die, but we can come back.” Jack flips at her “New Age hippie shit that you’ve never said, ever, in all the years that I’ve known you.” They briefly fight, but then almost make love, but Amy’s other soul takes over and breaks it off – leaving Jack frustrated in more ways than one. Later, sleeping Jack flashes back to waiting in a room with a gun and then shooting dead three intruders. When the police arrive, so does Amy. Jack is awakened by a phone call from Gary Fischer, who wants to share some important info about Amy.

Jack meets with Gary (Tory Kittles) who claims to have evidence linking Amy to the group that murdered Bill Anderson’s family. He wants to take another walk. Meanwhile, Shepherd arrives at the rest stop to find Karen dead and Madison gone.

The centerpiece this week was the argument between Jack and Amy that gave us a glimpse into what their marriage was like before all this craziness started. Remember, I complained that we had no idea what Amy and the others were like before they started acting strange, so this helped a little but not a whole lot. Still too much reading between the lines required. And the argument had a strange rhythm, going from extremes like him punching the door to quiet chatting to the couple almost making love in what was probably supposed to be like old times.

Amy seemed like she couldn’t stop herself from blurting out the “We don’t die. Here you must listen, because the lie they tell us to control us is not quite a lie. We die, but we can come back” speech. It was almost like she’d been waiting weeks to launch into her screed. And she certainly didn’t pick a great time for it. If Amy were “herself,” surely she would have known Jack would react with anger and confusion.

We also got a hint of might have happened that cost Jack his job with the LAPD. Jack talked about how much she helped him “that night” in LA. “You saved me, let me save you.” It looks like he was lying in wait for some suspects to show up (presumably at his own house) and shot them all dead. And, because he was drinking, Jack got into a lot of trouble for it. He was probably dating Amy at the time, and she helped him get through the trauma of the shootings and losing his job – and maybe that’s why they got married. Who knows?

Still, the argument was a chance for Simm and Sorvino to really bite into some meaty dialogue, and they both went for it. I was beginning to wonder why either actor signed aboard this meandering project. They must have both read this week’s script.

My favorite scene this week was Madison getting Medieval on the pay phone. My least-favorite was Shepherd calmly driving away while Karen’s car explodes in the background. I hate that cliché.

Marcus claims to have been playing in the orchestra on the night in 1791 when Mozart debuted an opera. How many times has he jumped into new bodies?

Why did Brud’s wife, Bobbi (Karin Konoval), pull a gun on Jack? What is Brud into? Is he one of the Nine?

Was that rat at the rest stop meant to be symbolic of Karen “ratting” on Madison? They showed the damn thing twice.

Jack revealed that he and Amy lost a baby. That will put a strain on any marriage.

The episode title, “Time Has Come Today,” refers to a song recorded in 1966 by The Chambers Brothers, and released in a popular remixed version (heard during this episode) in 1968.

QUOTE OF THE WEEK