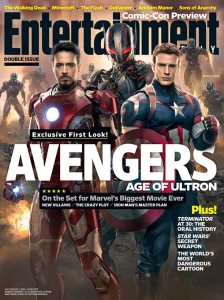 Marvel Studios have decided to make it even tougher to wait until next summer with a passel of intriguing photos from Avengers: Age of Ultron that reveal the true look of the mean machine and his henchbots for the first time — as well as show off the redesigned costumes of the returning heroes. 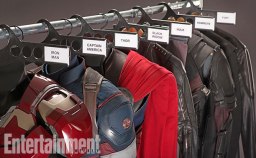 The sequel sees the return of writer/director Joss Whedon as well as Chris Evans as Captain America, Chris Hemsworth as Thor, Robert Downey Jr. as Iron Man, Scarlett Johansson as Black Widow, Mark Ruffalo as Bruce Banner/Hulk and Jeremy Renner as Hawkeye, as well as porting over Don Cheadle as War Machine from the Iron Man franchise and introducing James Spader (THE BLACKLIST) as the voice of Ultron. The new heroes seen here are Elizabeth Olsen as Scarlet Witch and Aaron Johnson as as her brother, Quicksilver. Yet to be revealed is Paul Bettany as the Vision.

Hopefully Marvel will use next week’s Comic-Con International: San Diego to pepper fans with more clues about the sequel.