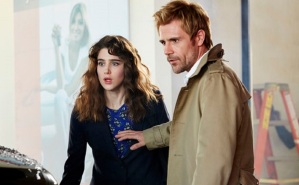 The pilot for NBC’s CONSTANTINE will not air until October, but the network has already decided to replace the female lead, Lucy Griffiths (TRUE BLOOD), who plays Liv Aberdine in the premiere. Liv is the daughter of one of Constantine’s dead friends, and he protects her from some demons in the pilot episode.

Producers decided that going forward with the series, they would need a more active, driving force to work off Constantine (Matt Ryan), so they are importing the character Zed from the Hellblazer comics, a powerful psychic who will be more at home in Constantine’s world of supernatural danger. The role will be played by Angelica Celaya.

Zed is intuitive, she can detect bullshit, and Constantine is a “bullshit artist.

When you put a wide-eyed innocent into that world, she’s just very reactive. One of the coolest things about Constantine is he doesn’t have any ‘powers.’ He came out of a time with all these superheroes with their garish colors and flashy powers, and he just comes out with a rumpled coat, wearing browns and greys, and he just knows a lot magic and spells, but it’s all knowledge-based. Anything he can do is based in knowledge and his own studying. Zed is actually one of the first women Constantine meets in the comic books, and she has various psychic powers. We felt ultimately she’s going to service the first season better as someone to pair Constantine up with. She can get in his face a little bit and have some of her own realizations and skills and really push him. But if whoever Constantine is working with is constantly on her heels, that just wouldn’t service the show really well.