One this fall’s most promising series is NBC’s CONSTANTINE, which will pit supernatural investigator John Constantine (Matt Ryan) against malevolent otherworldly forces mankind could never dream of. And he has an attitude about it.

I thought I’d gather together a few cool images from the show’s Facebook page which, along with the teaser video, make me believe the producers are on the right track with adaptation of DC Comics’ Hellblazer comic book series. 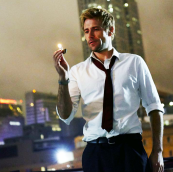 These images bring up two issues for me: