The infamous “actor’s online CV” has once again provided clues to stories on DOCTOR WHO — this time thanks to a performer named Ian Hallard, whose résumé indicates he will be playing Alan-a-Dale, the minstrel in Robin Hood’s legendary band of Merry Men!

Hallard (who played Richard Martin in AN ADVENTURE IN SPACE AND TIME) has been confirmed by the BBC as cast in episode three — which happens to be the very same installment for which DA VINCI’S DEMONS star Tom Riley was hired, leading to speculation that Riley will be playing Robin of Sherwood. 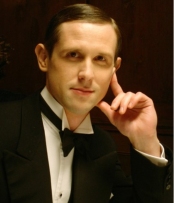 The script is by Mark Gatiss — he is also credited with penning another episode, one set to feature Ben Miller as a “storming villain” — and the rumored title is “Robot of Sherwood.”