I don’t think there’s ever been a movie mirror as creepy as this Oculus thing — even that magic mirror in 2012’s Snow White and the Huntsman. And to make that point, we have a new video clip and a some photos to go with the creeptastic Oculus trailer released earlier.

I Am Rogue has a selection of photos and the movie’s first poster. Not sure I would have gone with the “frightened children” motif, but… 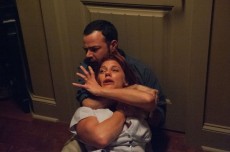 Here, thanks to MTV Movie News, is a foreboding little clip:

From this vid snippet we can discern that DOCTOR WHO alum Karen Gillan is playing the role of Hot Girl Who Investigates Strangeness in Her Nightie, while Rory Cochrane (late of CSI: MIAMI and 24) portrays Menacing Dude Who’s Suddenly Right Behind You! And that dying in your dreams = dying in real life thing has been done to… er, death already.

So, director Mike Flanagan (Absentia) isn’t looking to break any new ground with his characters — or, perhaps he intends to upend genre conventions by using its most familiar tropes in new and exciting ways. (Well, he… might.)

What kind of a horror movie will it be? Well, it is rated R — for what the MPAA describes as “terror, violence, some disturbing images and brief language” (which usually means two or three F-bombs). I know what you’re thinking: What, no nudity? Alas…

When Tim (Brenton Thwaites) is released from protective custody for the murder of their parents 10 years before, he’s surprised to find that his sister Kaylie (Gillan) has tracked down the Lasser Glass, an antique mirror from their childhood home which she believes unleashed a malevolent supernatural force that really killed their mother and father. The powerful and mysterious entity is soon running amok, causing nightmarish hallucinations and generally torturing the siblings.