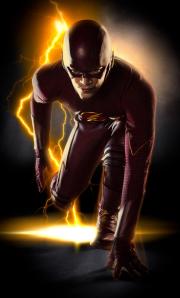 When Grant Gustin (GLEE) makes his costumed debut as DC Comics’ Flash, “the fastest man alive,” in THE FLASH, the live-action pilot ordered by The CW, this is what he will be wearing.

From the neck up, it looks similar to the usual Flash costume, though the red is much darker, and the material looks leathery — which does not thrill me because it reminds me of the dreaded Daredevil movie! Ugh. The lightning bolts on the ears are a marked change from the wings Flash sports on the comics page.

The super duds were designed by Colleen Atwood, who won Oscars for Alice in Wonderland (2011), Memoirs of a Geisha (2006) and Chicago (2003), so she knows her stuff! And it least it looks nothing like the abomination that was Green Lantern’s costume back in 2010. Or even Wonder Woman’s fighting togs in her abortive new TV pilot — or even her comic book redesign.

This version of the Flash (does anyone else remember the 1990 series, starring John Wesley Shipp?) is a spinoff from The CW’s current hit superhero drama, ARROW. Gustin has already appeared in Flash’s civilian identity, scientist Barry Allen, before he becomes the Scarlet Speedster. The current plan is for Barry to gain his powers same way he did in the original comics, which means a bolt of lightning spills a mixture of chemicals on Barry.

Shipp will guest in the pilot in “a mystery role” that rumors peg as Barry’s father. The pilot also will star Candice Patton, Rick Cosnett, Danielle Panabaker, Carlos Valdes, Tom Cavanagh and Jesse L. Martin, and begins shooting this week, but it does not yet have an announced airdate.

ETA: We now have the full-body version of the suit, rather than just the headshot.