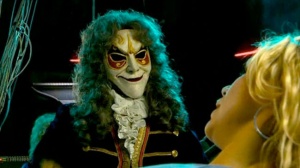 If I had to pick the most unlikely monsters from rebooted DOCTOR WHO to make a return appearance, the Clockwork Droids would be very, very high on that list. After all, those robots existed only to service their ship, the SS Madame de Pompadour.

Nevertheless, there has been a pretty persistent rumor that the Clockwork Droids will appear in the 12th Doctor’s (Peter Capaldi) debut story of series eight, which is set in Victorian times. The latest tenuous bit of  “evidence” to support the rumor is the resume of an actor that describes him as playing a “Restaurant Droid.” Of course that could be any sort of droid, couldn’t it?

In “The Girl in the Fireplace,” the 10th Doctor (David Tennant) defeated the time-travelling robots by cutting them off from their starship in the future, and, with no purpose anymore, they all shut down and were left stranded in 18th century France.

Although I would enjoy seeing the creepy-looking ‘bots one more time, it seems highly unlikely the same particular group of robots would reappear; perhaps the droids would be from a similar ship to the Pompadour.