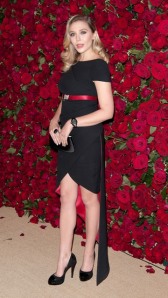 After Elizabeth Olsen was cast as the Scarlet Witch for Avengers: Age of Ultron, fans know Wanda Maximoff is in the competent hands of a beautiful and talented actress, so only one question remains: What will she wear?

The Witch has had one primary costume for decades, and that has been changed up and reworked in more recent times, but whenever you say “Scarlet Witch” to a true comics fan, only one image comes to mind: her classic “red swimsuit over red mesh” uniform.

However, following the trend of the Marvel movies to redesign characters’ outfits — even Captain America and Iron Man were tweaked for the big screen — director Joss Whedon is giving the Witch another makeover.
END_OF_DOCUMENT_TOKEN_TO_BE_REPLACED