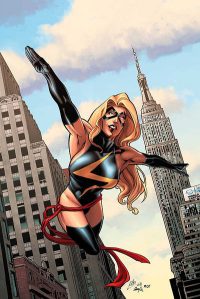 There’s long been a rumor that Marvel wants to beef up its superheroine quotient from one — Black Widow — to… er well, at least two. One way to accomplish goal was thought to be adding Ms. Marvel to Avengers: The Age of Ultron. It now appears that may be more than just a rumor.

Latino-Review — which often has very good sources about this sort of thing — claims that Ms. Marvel definitely will be in the movie, but with a slightly altered alter ego:

“Miss Marvel is the last piece of major casting left in the movie. Yeah, Miss Marvel. Now, I’m not going to spoil HOW she is in it, but she is in there, kids.”

So, it will be “Miss” not “Ms.” Marvel? I wonder how that’s going to go down with a certain segment of the viewing population…

As for casting, well… anyone remember the rumors from a few months back that Katee Sackhoff was meeting with Marvel about a hush-hush role? Perhaps that was Ms./Miss Marvel. She certainly would fit the part! And I would love to see her in the role.