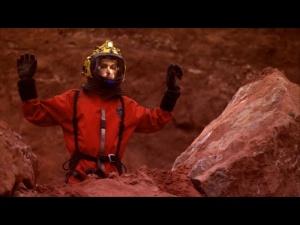 The Waters of Mars

It’s hardly surprising that we know next to nothing about DOCTOR WHO series eight — which just started shooting for a probably fall debut — but at least we know something about Peter Capaldi‘s debut season as the 12th Doctor.

For instance, while executive producer Steven Moffat has written the premiere episode, the follow-up is being written by Phil Ford, who, while he does have some experience with the Time Lord — he penned “The Waters of Mars” for the 10th Doctor — has much more experience writing a bunch of THE SARAH JANE ADVENTURES and an episode of TORCHWOOD. Still, fresh blood for a fresh Doctor, eh? Ford would offer only the barest of bare-bones hints about his story: “Behind enemy lines.”

Well, that certainly is cryptic enough. Is that the story brief? Is it the title? Is it the theme of the episode? Who’s behind which enemy’s lines?

Ford was, however, more than eager to share his… er, eagerness to have the job, telling DoctorWhoTV:

“I’m over the moon in a TARDIS! And I don’t know how I’ve managed to keep quiet about it for so long! It’s a huge honour to write for Doctor Who at any time, to be writing Peter Capaldi’s second adventure is that to infinity! I can’t wait to get on to set!”