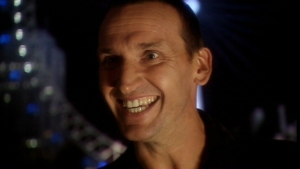 DOCTOR WHO show-runner Steven Moffat confirmed to Doctor Who Magazine that the original plan for the 50th anniversary story, “The Day of the Doctor,” had Christopher Eccleston’s Ninth Doctor wiping out Time Lords and the Daleks to end the Time War — a job that eventually went to the newly created War Doctor (John Hurt).

But even in the beginning, Moffat knew there was a good chance his plans would have to change due to Eccleston’s famous reluctance to revisit the role:

“I was pretty certain Chris wouldn’t do it, although he did agree to a couple of meetings. So, instead, we had the challenge and excitement of introducing a BBC audience to a brand-new Doctor.”

END_OF_DOCUMENT_TOKEN_TO_BE_REPLACED

I can’t think of a better antidote for a cold Monday morning in December than the first trailer for auteur Wes Anderson‘s new movie, The Grand Budapest Hotel. This clip introduces some of the cast of wacky characters, and hints at what the story might involve…

The Grand Budapest Hotel will open the Berlin Film Festival in February, then go wide in the USA on March 7.