What is former DOCTOR WHO star Matt Smith up to now? He is once again indulging his apparent love of playing crazy murderers by following up the Hollywood movie How To Catch a Monster with a London stage production of American Psycho, a musical based on Brett Easton Ellis’ satirical novel.

The blackhearted book was turned into a 2000 film starring Christian Bale (The Dark Knight) as Patrick Bateman, a 1980s businessman obsessed with the material trappings of success — and no qualms about murdering anyone who doesn’t meet his high personal standards. 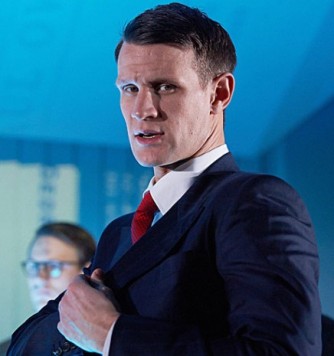 The novel was adapted by Roberto Aguirre Sacasa (GLEE), with music and lyrics by Duncan Sheik. It is directed by Rupert Goold and running at London’s Almeida theater through Jan. 25.

I cannot blame the network, because my eyes tear up at the thought that DOCTOR WHO’s Matt Smith’s 11th Doctor will be going away in just over a week from now…

To mark the occasion, BBC America compiled a list of 11 things they will miss about the 11th Doctor. I agree with all of it:

Yep, I knew I shouldn’t have watched it again… the brainy specs! Come back, Pond!