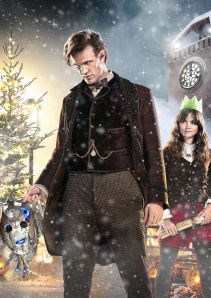 Christmas is now less than one month away, and that means we are creeping ever closer to Matt Smith’s final story as the star of DOCTOR WHO, which makes me so sad I can barely stand to type it. The title of Matt’s swansong as the  Doctor has been unveiled: “The Time of the Doctor.” And, along with that name comes a rather intriguing poster.

“Orbiting a quiet backwater planet, the massed forces of the universe’s deadliest species gather, drawn to a mysterious message that echoes out to the stars. And amongst them — the Doctor. Rescuing Clara from a family Christmas dinner, the Time Lord and his best friend must learn what this enigmatic signal means for his own fate and that of the universe.”

I would like to think the planet in question is Trenzalore, because while Earth certainly is a backwater world in an unfashionable arm of Mutter’s Spiral, it is far (very far) from quiet, subject as it is to repeated (almost nonstop) alien invasions and visits from the Doctor.

But the just-released teaser information contains more intrigue than first meets the eye: Take a closer look at the poster art and you will see what appears a pair of eyes belonging to incoming 12th Doctor Peter Capaldi, and another set of peepers that could belong to the most unexpected secret guest star of all: Paul McGann!

In the portrait version of the poster, we clearly see the Doctor and Clara — but look at the fire behind the Cyberman’s head; it looks like Capaldi is staring out of the flames! Meanwhile, the landscape version features what could be an apparition of McGann’s face in the fire next to Clara. Or perhaps it’s just another peek at a flaming Capaldi?

Show-runner Steven Moffat was quite clear that McGann — so wonderful in that “The Night of the Doctor” minisode — would not be making any more appearances anytime soon:

“One Doctor at a time is the real rule — ‘Who would be on the lunchbox?’ is always my question when we talk about having more than one Doctor. Quite soon, it’s going to go back to… ‘There is one Doctor and that’s who he is.’ He’s one man with many faces; he’s not a committee of people with unusual hair.”

So what do you think? Is Moffat lying about the whole “one Doctor at a time in non-anniversary years” rule? Or did he leave himself some wiggle room to slip in a classic Doctor by qualifying his statement with “Quite soon”? Will we see a surprise appearance by the Eighth Doctor in the Christmas special?