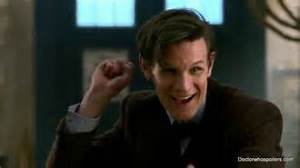 That DOCTOR WHO executive producer Steven Moffat lies — for the good DOCTOR WHO and its fan base — is not in dispute; but would he wrangle a classic Doctor to fib about his participation in “The Day of the Doctor”?

We’re all familiar with Moffat’s denials about the involvement of this or that character/actor in this or that story, but this report is a little different, in that it claims someone is participating, instead of the usual is not taking part line.

While this report has not been confirmed by the BBC, it does come directly from the actor involved, so I will hold the info until after the cut in case anyone wants to remain pure and unspoiled in every way for the 50th anniversary story.

The latest blockbuster “Take this with a metric tonne of salt” report is that Tom Baker, the erstwhile Fourth Doctor, will appear in the special — at least according to the HuffingtonPost.com. The website quotes Tom as saying:

“I am in the special. I’m not supposed to tell you that, but I tell you that very willingly and specifically; the BBC told me not to tell anybody but I’m telling you straightaway. It worked out very well, I think, judging by the reactions of the technicians.”

A representative for the BBC said:

“As with William Hartnell’s recent appearance in the last season finale, anything is possible in Doctor Who. But nothing is certain.”

So… is this true? Tom Baker is, hands-down, the most popular, most-recognized incarnation of the Doctor here in the USA, so his inclusion would mean a lot more eyeballs for BBC America. But, on the other hand, BBCA is not promoting Tom’s appearance, so the impact would probably be small from any cameo.

Still, it’s fun to imagine the Fourth Doctor being in the special somewhere, in some small way — even a voiceover in a scene would be a treat!

Also? What does this mean for other classic Doctors who have supposedly been left out of the anniversary story?