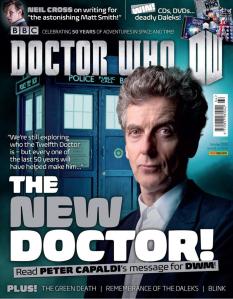 Newly anointed 12th Doctor Peter Capaldi graces the cover of the new Doctor Who magazine with the quote: “We’re still exploring who the Twelfth Doctor is — but every one of the last 50 years will have helped make him.”

Well, DOCTOR WHO executive producer Steven Moffat gave DWM a nibble of an inkling of an idea of what he has in mind for the latest incarnation of everyone’s favorite Time Lord:

“The Doctor’s always said he’s thousands of years old, and suddenly he’s going to look closer to what we know he secretly is. He’s going to look like an older man. A fiercer man. He won’t be the dashing young man he was a minute ago, and I think that’ll be rather exciting.”