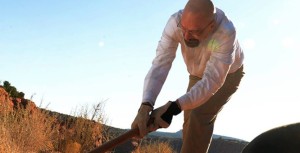 As we count down BREAKING BAD’s final few episodes, I’m not the only one who wants Walter White to get away with all this, am I? After all, this whole crystal meth empire thing was never his idea.

Walt’s first (and perhaps biggest) mistake was surviving the cancer; he was just supposed to cook up one batch of meth, secure a nest egg for his family and then die. But his cancer went into remission and his meth lab went into overdrive. And now Walt is right back he where he started — trying cut a deal so he can die and leave his family a big ol’ pile of drug money.

And I want him to get away with it. I’m rooting for Mr. White.
END_OF_DOCUMENT_TOKEN_TO_BE_REPLACED