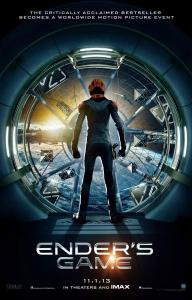 Some people did not love it so much that they have called for a boycott of the Ender’s Game movie, noting that Card’s intolerant actions have included joining the board of the National Organization for Marriage, fighting and opposing gay adoption and a safe-schools initiative.

A group called Geeks OUT has launched “Skip Ender’s Game,” a movement asking fans to do exactly that, with the idea of denying Card any further royalties from the property. A series of SEG events are scheduled in New York, Orlando, Seattle and other cities, timed to the movie’s Nov. 1 release.
END_OF_DOCUMENT_TOKEN_TO_BE_REPLACED

Highly-regarded Korean writer/director Bong Joon-ho (The Host) has managed to come up with one of the worst ideas for a movie that I’ve heard since… well, since somebody suggested Gore Verbinski make a Lone Ranger movie. Bong has written and directed the graphic novel adaptation Snowpiercer.

The movie purports to tell the tale of the last survivors of the human race riding on a train that endlessly circles the globe following a new ice age that wipes out most living things on Earth. Seriously, that’s the premise. The story sees the “freeloaders” who live at the end of the train attempt a revolution by seizing the engine of the train from the privileges upper class at the front of the train.