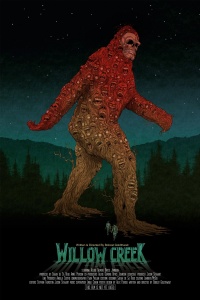 If you’re not familiar with the work of artist Alex Pardee, you should get acquainted. The guy is a genius when it comes to twisted visuals. His work can be a bit shocking and even funny, but it’s always inspired and out of the ordinary. (He worked on designs for Zack Snyder‘s Sucker Punch.)

Here, we see Alex’s genius in the poster for Bobcat Goldthwait‘s Bigfoot movie, Willow Creek. Yes, that sentence is a lot to take in, so I’ll understand if you need to go back and reread it — but add this thought: Bobcat wrote and directed the flick. And early word from people who have seen it is… positive!

The premise of the movie finds young couple Jim and Kelly venturing into the woods of the Pacific Northwest, seeking to retrace the footsteps of Roger Patterson who, in 1967, shot the most famous alleged film footage of Bigfoot. In the small town of Willow Creek, which is a mecca for Bigfoot believers, the couple gets all sorts of different and often conflicting descriptions of the beast. Despite dire warnings, Jim and Kelly set off into the woods to videotape the creature  — and the results are revealed in found-footage format.