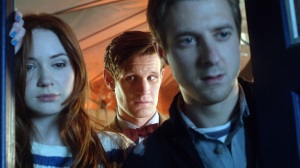 Well, Steven Moffat, the show-runner (and de facto Lord President of all things DOCTOR WHO) has finally spoken definitively about the possibility of Amy and Rory Pond (Karen Gillan and Arthur Darvill) returning for the Time Lord’s 50th anniversary story. And his answer is a simple No.

As the creator of Amelia Pond and Rory Williams, Moffat had every right to be their destroyer, and destroy them he did. He both killed them and didn’t kill them the same time by going back to the Weeping Angels’ roots: the Angels sent Amy and Rory into the past and them “live themselves to death.” So they lived full lives and yet died before their time — at the same time. It was the ultimate case of a creator having his cake and eating it too; killing his darlings without murdering them.

So when asked about bringing them back already, Moffat was clear and unambiguous:

“You could never eliminate the possibility of dream sequences and flashbacks, but will the Doctor see them again? No. When I was first talking to Karen and Arthur about it, we said, ‘Let’s make it the proper ending.’ Bringing back things just gives you sequel-itis. Just end it and get out. Heaven knows if they’ll appear in some form of flashback — I have no plans to do that, I have to say — but the story of Amy and The Doctor is definitively over.”

So there you have it, straight from the horse’s mouth: No more Ponds.

As far as I’m concerned, Moffat is making the correct call. It lessens the drama of the “Fall of the Ponds” story to simply have them show up again and mitigate the Doctor’s (Matt Smith) crushing and paralyzing grief.

As much as I enjoyed seeing Rose return at the time, in retrospect I have come to realize what a mistake it was to bring to her back. I prefer to remember the 10th Doctor (David Tennant) and Rose (Billie Piper) on opposite sides of that blank white wall, a universe apart, each lamenting the loss of the other. I remember the sadness of their then-final goodbye, as the Doctor burned out a supernova to breach the barrier between universes to bid her farewell. How he ran out of time before he could say The Words to her…

I don’t want that to happen with Amelia Pond and her Raggedy Doctor. Their story is over. Every true story has a beginning, a middle and an end. And no one should ever go back and awkwardly try to graft a sequel onto it.

One thought on “No Ponds for DOCTOR WHO’s 50th — Or Ever Again!”