Wow, just when I thought Iron Man 3 could not look any more promising, along comes the international trailer — which makes it looks twice again as good as I am anticipating. In fact, right now, I think this could become the best superhero movie ever made (supplanting The Avengers, which was essentially perfect).

Think I’m overreacting? Check out the clip (with Chinese subtitles):

IM3 looks as exciting as hell, and I really like the way Sir Ben Kingsley is voicing the Mandarin. It’s like the actor is relishing the chance to ham it up without going overboard as he has in some previous villainous roles. Mandarin is such an old-school Iron Man villain that I love using him, but I’m still a little wary of him falling afoul of today’s political correctness. It’s also smart the way the filmmakers are keeping his 10 rings close to the vest (so to speak). 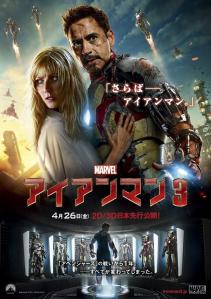 It would appear that Robert Downey Jr. gets some really meaty material to play in this installment, with Tony being all worried and protective of Pepper (Gwyneth Paltrow) and angsting all over the place — not to mention getting the shit kicked out of him. Repeatedly.

The beginning of the clip makes me think that Rhodey (Don Cheadle) may be wearing the Iron Patriot armor in an attempt to make the people of the USA believe that Iron Man is on board with the new president’s agenda — which could be a bad thing. Also, might Pepper finally get a metal suit of her own? She did briefly don armor in the comics, using the codename Rescue. And the Chinese poster is pretty awesome, too.

Iron Man 3 opens on May 3. Here is the studio synopsis:

Marvel Studios’ Iron Man 3 pits brash-but-brilliant industrialist Tony Stark/Iron Man against an enemy whose reach knows no bounds. When Stark finds his personal world destroyed at his enemy’s hands, he embarks on a harrowing quest to find those responsible. This journey, at every turn, will test his mettle. With his back against the wall, Stark is left to survive by his own devices, relying on his ingenuity and instincts to protect those closest to him. As he fights his way back, Stark discovers the answer to the question that has secretly haunted him: does the man make the suit or does the suit make the man?