Fan opinion about DOCTOR WHO’s humongous gallery of monsters/villains is almost as subjective as our views of the various Doctors; which enemies are the best or worst or scariest or the most fun. And each of us has a very personal wish list of which classic foes should return to the series.

No. 1 on my Return List list is the Zygons. I was thrilled that the 11th Doctor mentioned them in “The Power of Three,” but sadly, they did not actually appear onscreen. I desperately want those sucker-covered shapeshifters back in the series — ideally in a Lovecraftian-style episode.

But No. 2 for me has always been the Ice Warriors. I fell in love with the Martian reptiles when I saw the Second Doctor adventure “The Seeds of Death.” They seemed so interesting; I mean, nitrogen-breathing reptiles that thrived in cold weather? How much more opposite to Earth reptiles could they be? Their look was also… uh, intriguing. Very much of the period, the design and execution of the creatures were packed with more imagination than the budget could handle; hence bulky, ill-fitting plastic bodies representing biometric armor that screamed “Man in suit!” But they were still a great visual. 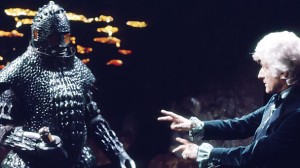 However, the way the Ice Warriors were played really sold them. I loved the idea of them whispering everything — it made them seem sinister and calculating. In fact, the whispers counterbalanced the cliché hissing Ssssssssss. In fact, the whispering with long Ssssss made them seem much more threatening. The-Powers-That-Be were going for a sense of menace, so the vocal affliction was blamed on the relative lack of nitrogen in the air breathed by humans.

And then there was the way the Ice Warrior civilization was portrayed: Proud and noble, with sophisticated values including a strong sense of personal honor. The Sontarans are another warlike race, but to me they epitomize the other end of the spectrum — their arrogant, aggressive, destructive side always on display. The 10th Doctor paid the Ice Warriors tribute in “The Water of Mars” (another tease episode), calling them “a fine and noble race [that] built an empire out of snow.” He also met them in his Third incarnation, but which time the Ice Warriors had become much less warlike. (Interesting fact: As reptilian races that sprang up on planets next to each other, the Ice Warriors and Silurians represent parallel evolution.)

So I was elated by the announcement that the Native Martians would be returning in the third episode of the second half of series seven. I had been living off rumors of their imminent return since sometime before series three. But always, I had been disappointed until now.

Of course, there is always the possibility that the Ice Warriors will return in an unexpected way. Before series seven kicked off, there were strong rumors about the return of the Yeti, including alleged updated designs on the Internet. What we got, in “The Snowmen,” was the return of the Great Intelligence — the power behind the robotic abominable snowmen —not the furry monsters themselves. Although the Ice Warriors obviously will be redesigned for a modern audience, they should still be recognizable.

The rumor is that the story will feature just one Ice Warrior trapped on a Russian submarine. It probably won’t be an Ice Lord, if for no other reason than the warrior class is bigger and would presumably have a much harder time getting around inside an underwater tin can.

Couple that with the restoration of the original Patrick Troughton story “The Ice Warriors” via animation, and it is indeed a very good time to be a fan of the Ice Warriors.