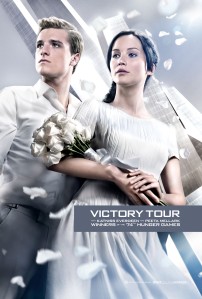 And so it begins… the real promotional push in the ramp up to this fall’s big sequel, The Hunger Games: Catching Fire. (But who’s that guy photobombing Katniss?) Up until now, we’ve had to make due with some sexy set photos.

I like the idea of starting with these Victory Tour promotional posters because the campaign feels very organic. In the books, a Victory Tour was de riguer for the winner of the Hunger Games, and of course the Capital would be eager to put the best possible face on the unprecedented dual winners, Katniss Everdeen (Jennifer Lawrence) and Peeta Mellark (Josh Hutcherson).

Of course, you can never go wrong with plastering Jennifer’s luminous face on anything, so it’s no surprise seeing her looking awesome here — beautiful and brave and heroic…

But there is also an underlying sense of the sinister in both images: those deceptively lovely white roses, and the huge, fascist structure dwarfing the power couple. It’s like the architecture is looming over Katniss, declaring that the Capital is mightier than any tiny victor.

The official movie synopsis, however, is less than inspiring…

The Hunger Games: Catching Fire begins as Katniss Everdeen has returned home safe after winning the 74th Annual Hunger Games along with fellow tribute Peeta Mellark. Winning means that they must turn around and leave their family and close friends, embarking on a “Victor’s Tour” of the districts. Along the way Katniss senses that a rebellion is simmering, but the Capitol is still very much in control as President Snow prepares the 75th Annual Hunger Games (The Quarter Quell) – a competition that could change Panem forever.