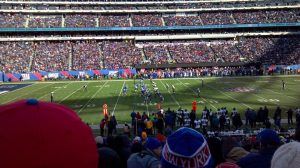 My beloved New York Football Giants won their last game of the season today, but were eliminated from playoff contention when Chicago defeated Detroit. (Also, Minnesota beat Green Bay, but that was just overkill.) My brother and I were at MetLife Stadium in East Rutherford, N.J., this afternoon, cheering with our applause muffled by gloves as Big Blue plucked the hated Philadelphia Eagles, 42-7.

Of course the Giants were the defending Super Bowl champions, and now will not get a chance to repeat last year’s exciting run to the Lombardi Trophy. They just did not play well enough.

I’m of two minds about today’s development. On one hand, the rabid fan in me is sorely disappointed that the Jints won’t even get a chance to defend their crown. But on the other hand, the team played so terribly at times this season that they did not deserve the opportunity.

Yes, the temperature in the frosty, windy stadium was in the teens, but seeing the Giants play out the game with determination and pride; with an unwillingness to give up after two horrible losses in the past two weeks. Quarterback Eli Manning tossed a career-high five touchdown passes (the three in the first quarter were also a personal best). Running back Ahmed Bradshaw rumbled over the 1,000-yard mark for the season. But this year, a 9-7 record wasn’t good enough to punch their ticket for the postseason.

Well, there’s always next year, when Super Bowl XLVIII will be played in the Meadowlands – meaning the Giants could become the first-ever team with homefield advantage in the Super Bowl!