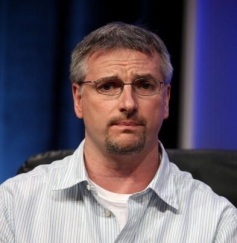 AMC has ordered a fourth season of the zombie thriller THE WALKING DEAD, but Glen Mazzara, the executive producer who took over the series early in the second season and guided it to unprecedented ratings this season, will not be back next year.

This despite the fact that TWD won the adults 18-49 demo over every other show (cable and broadcast) on TV this fall. In fact, TWD is the first cable show to outright beat the broadcast programs in its time slot.

You can blame that old standby, creative differences. (TWD seems especially vulnerable to that condition, since original show-runner Frank Darabont barely lasted into the second season.) The network cited “differences of opinion” on where the show should go next.

Mazzara will be sticking around to finish postproduction on season three before moving on. The second half of the third season kicks off on Feb. 10. About 15.2 million people watched the Dec. 2 midseason finale of TWD — a number most broadcast execs would eat human flesh to attain.
END_OF_DOCUMENT_TOKEN_TO_BE_REPLACED