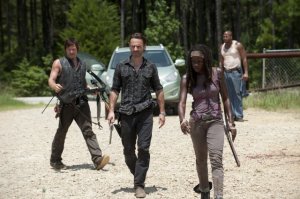 Imagine you’re Rick and you’d previously sent ace scavengers Glenn and Maggie to find formula for your newborn daughter, but hours later a living woman with a grimace that can kill at 50 yards arrives at the gates of your prison home carrying a katana and the mother lode of infant formula; you might justifiably have a few questions. Questions such as, What happened to Glenn? What happened to Maggie? Were all those phone calls from the Great Beyond covered by my calling plan?

Glenn (Steven Yeun) was at moment, duct-taped to a chair in Woodbury while being tortured/interrogated by Merle (Michael Rooker) the Backwoods Pirate with Knife Attachment. But no matter how much Merle beat and cut him, Glenn would not reveal the location of his camp. So Merle tosses a biter into the room to deal with Glenn. Except the tied-up Glenn fights back and brains the biter. Then the Governor (David Morrissey) goes to work on Maggie (Lauren Cohan), turning on the charm by forcing her to strip and then pretending he’s going to rape her. But she won’t crack either. It’s only when the Guv threatens to gut Glenn that Maggie gives up the prison.

At the prison, Carl (Chandler Riggs) makes the call to bring Michonne (Danai Gurira) inside the gates after her zombie-guts camouflage begins to fail. Rick (Andrew Lincoln) is suspicious and demands answers about what happened to Glenn and Maggie. Michonne says they were taken to this strange place called Woodbury, and Rick lets Herschel (Scott Wilson) patch up her gunshot wound. Then Michonne agrees to lead a rescue mission. And maybe she wouldn’t mind getting a little payback from Merle (maybe a pegleg to go with that stump on his wrist). 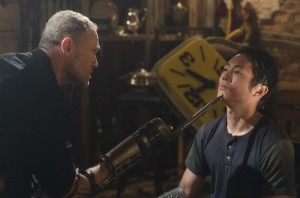 In Woodbury, Andrea (Laurie Holden) is assigned to help Milton (Dallas Roberts) with an experiment to see if Mr. Coleman (Peter Kulas) will retain any residual personality after he dies of prostate cancer and turns. Her job is to put down Mr. Coleman after the data are collected. When Coleman turns, there is no sign of intelligence, so Andrea brains him with a knife before he can tear out Milton’s throat. Andrea is feeling all vulnerable after this, so she turns to the Governor, who has to decide how to handle Andrea when her friends inevitably come to rescue Glenn and Maggie. But at least he has dispatched Merle and some men to investigate the prison.

Rick, Michonne, Daryl (Norman Reedus) and Oscar (Vincent Ward) are sneaking toward Woodbury when they are attacked by a herd of walkers and seek refuge in the hunting cabin of a crazy hermit (Alex Van) who flips out, “forcing” Michonne to kill him. The gang tosses his body to the walkers besieging the front door so they can run out the back. Finally, Rick’s task force gets a glimpse of the heavily fortified Woodbury.

It’s not like Rick assumed Michonne was the local Avon Lady, but he had to wonder exactly who would be moving in a pack of walkers carrying a grocery basket full of baby formula. The situation shows how smart the-powers-that-be behind the show are: They know that we know Michonne is trustworthy, but Rick doesn’t know that. As far as Rick knows, this stranger could have jumped (or worse) Glenn and Maggie for their supplies and merely walked in the wrong direction. So we viewers are worried that Michonne’s “Woman of Few Words” act will get her tossed in a cell and ignored when she has vital information. Also, it’s frustrating that she doesn’t describe the “sonofabitch who shot me” as a one-handed racist, or mention that she left a blonde pal named Andrea back in Woodbury. Argh! Frustration!

Michonne’s presence means Woodbury cannot be more than a day’s limp from the prison. I’m seriously beginning to question the sense of direction of Rick’s little band of wanderers. I mean, he must have been shaking his head, thinking, “We wandered in circles for eight months and missed an entire town? Who did we have scouting for us – Glenn?” And when Merle stumbled upon Glenn and Maggie, he was on his way back to Woodbury – as an experienced woodsman, he knows not to stray from his path, so he was taking a direct route – meaning Woodbury was close by; didn’t Glenn and Maggie see any signs? Hard to believe these people survived by pinning their hopes on randomly locating supplies all winter long.

My favorite part of the episode was when Daryl reintroduced Rick to Carol. He was so happy to see her it was like she was a gift back from the dead. Rick had a moment’s hesitation, as if she might be a hallucination, but she is real. This rare bit of genuine joy for Rick was a welcome change. Oh, then there was the interlude in which Rick and Carl named the new baby. “Judith” is better than conjuring up memories of any of the zombie victims, but having her namesake be one of Carl’s grade school teachers seems a bit random. (“Hey, remember…”) Still, it’s a bit better for an infant than “Li’l Ass-Kicker.”

Mr. Coleman’s room – with the random paintings hanging around and the odd music – reminded me of the scene in Cole’s hospital room in the future from 12 Monkeys. I half expected Milton to break out in a rendition of “Blueberry Hill.”

Milton was an only child, an orphan and telecommuter – which (kind of) explains why he’s so uncomfortable around people. But was he really a doctor? A telecommuting doctor?

I love that Rick’s group has actually learned a little something about survival during their time on the road. When the assault group was confronted by walkers, Rick barked, “Formation; no gunfire,” and the group formed back-to-back and dispatched the undead with precision and economy that even impressed Michonne. 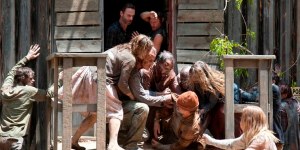 Will Merle’s group run into Rick’s team and fight it out with the Dixon boys opposite sides, or will the squads pass in the night, allowing Merle to test Carl’s defense of the prison? It has all the makings of a midseason finale, don’t it?

QUOTES OF THE WEEK

“Shoot, I figured the way Officer Friendly abandoned people, he would have left you behind by now.” – Merle

“Remember the Alamo?” – Daryl, assessing their odds of survival

“I think I’d like to record my findings while they’re fresh.” – Milton, excusing himself to change his underpants after the Mr. Coleman incident