These are the new Cybermen for Neil Gaiman’s second DOCTOR WHO story (provisionally known as “The Last Cyberman”) and more than ever, I’m hoping these guys are actually the old Cybermen, the silver giants from Mondas. And none other than Gaiman himself has bolstered my hopes! Follow the jump after the gallery to see Gaiman’s intriguing comments for yourself. 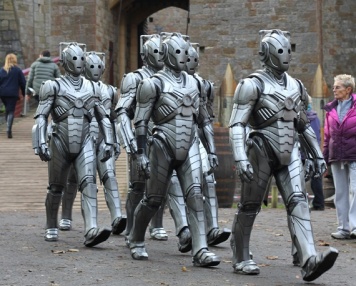 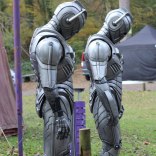 Gaiman talked to a French website, and Den of Geek relayed the info. Here’s what he said:

“It will be a stand-alone episode. It will be the series’ penultimate episode. But it has a beginning, a middle and an end… Steven [Moffat] wrote to me and asked if I wanted to make the Cybermen scary again. I thought back to myself at the age of 6 or 7, ‘The Moonbase,’ ‘Tomb of the Cybermen’… I saw them when they were first broadcast. The Cybermen were much scarier than the Daleks, because they didn’t make any noise. The Daleks moved around all over the place shouting “Exterminate!” etc. With the Cybermen, it’s different. You turn around and bam! There they are. It’s scary. I told him that I was going to take the Cybermen from the sixties […] and see what I could do. I don’t know if it’s going to work, we’ll see.”

This unit of Cybermen was captured in the course of location filming, and I think they look great – svelte, sleek and intimidating, with a segmented design that feels like a nod toward the movie version of Iron Man, too!

Gaiman also said he’s not certain the story will be called “The Last Cyberman”:

“I don’t know anything. The title of ‘The Doctor’s Wife’ was ‘Bigger on the Inside’ until two weeks before it aired. It could be anything.”