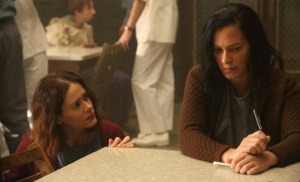 The show went ahead and made Dr. Arden a former Nazi scientist who experimented on victims in concentration camps. This is quite a cliché origin story for the guy, but then again AHS:A is not known for stretching itself I terms of originality, but rather employing familiar tropes in new ways. Let’s see if it can put a new and interesting spin on the secret Nazi war criminal.

The series doubled down on its Nazi horror by not only invoking mad scientists from pulp stories, but also by using a real-life historical figure, Anne Frank. Young Frank is an icon around the globe, so the-powers-that-be better be careful how they handle her. At this point, I’m skeptical that the new patient really is Frank, but we shall see.
END_OF_DOCUMENT_TOKEN_TO_BE_REPLACED