This week’s story is unusual in that it does not feature our usual intrepid little band of survivors, instead focusing in on lost sheep Andrea and her new pal, the katana-wielding Michonne. But that doesn’t make this a bad episode; in fact, it’s a very important chapter. Merle is reintroduced (with a blade replacing his severed hand), the town of Woodbury is introduced, and we get to meet the man in charge – and the season’s Big Bad – the Governor. The Guv is a very popular character from the comic book series.

I tip my hat to The-Powers-That-Be for making an exposition-heavy episode so entertaining. This is one of those stories where characters are moved into place and conflicts are set up for future episodes, but the story still worked for me. And I’ve been wondering what was happening with Andrea and Michonne since they left their safe haven.

The episode begins with the helicopter we have glimpsed periodically – remember it from the very first episode? – only now the copter is having trouble and crashes. Andrea (Laurie Holden) and Michonne (Danai Gurira) come across the wreckage and find two dead but the pilot survived. Suddenly a number of vehicles arrive and the gals hide while Merle (Michael Rooker) emerges from one of the cars. He has a prosthetic bayonet attached where his missing hand used to be. As the ladies watch the party search the wreckage Michonne is forced to behead her pets in order to keep them quiet, and Merle sneaks behind them and captures them – recognizing Andrea. The girls are blindfolded and taken to… an idyllic little town. One with a doctor to treat them and hot water and clean streets and neat houses. The leader of the town, the Governor (David Morrissey), assures them that Woodbury is safe from the outside world, and invites them to stay – or they are free to go. This is all too convenient for Michonne, who just wants her confiscated katana back so she can leave, but she won’t go without Andrea.

One of the Governor’s scientists, Milton (Dallas Roberts), examines the heads of Michonne’s pets and tells the governor that if the zombies are prevented from feeding they lose interest and slowly starve. But also, they provide protection and camouflage by masking the living from the undead. The Governor wants to know more. He goes to Sgt. Welles (Julio Cedillo), the helo pilot, and learns the location of his unit, promising to bring his men to Woodbury. Later, the Governor goes to the encampment – and his men kill every one of the soldiers and loot their weapons and supplies. Returning to Woodbury, the Governor relaxes in his office with a drink in one hand, a machete in the other and… watches a bunch of decapitated heads – including Welles’ – floating in fish tanks.

That’s right, this episode concentrated completely on Andrea and Michonne, without checking in on the prison. But that’s fair, since the gals weren’t seen last week. But it’s also a clever storytelling device: By not showing Rick and the gang at the prison, this story reinforced the idea that Woodbury is another world, and that Andrea and Michonne are totally on their own. Woodbury is a closed society, encapsulated by its walls and protected by its ruler from the outside world. Andrea and Michonne don’t know what’s going on with the original survivors – and, in fact, suspect they may be dead – so the audience doesn’t know what’s happening, either.

Andrea is all too willing to drink the Woodbury Kool-Aid, but Michonne is having none of it. It probably just seems too convenient for her: an idyllic oasis that the walkers haven’t touched? And maybe Andrea is finding herself instantly drawn to the magnetic Governor. And why won’t they let her carry her katana? (They don’t even know how dangerous she is with it.)

Unlike the comic book version of the character, who was scarred and gave off an evil vibe, the Governor on the show is portrayed as a pure politician: He’s handsome and talks a good game. That speech about the soldiers was sickening. He spoke in a reverent voice about the men’s “sacrifice.” He’s a true wolf in sheep’s clothing. He’s manipulative and charming, but everyone is afraid of him, so it’s more like he rules by fear rather than charisma. (I would just remind everyone how wonderful Morrissey was in the story “The Next Doctor” on DOCTOR WHO, so the man has range!) The question is, does he really care about the people of Woodbury, or are they just pawns? 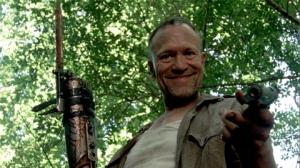 And Merle is back! Merle is still talking a good game, but the Governor is keeping him on a short leash, and it’s amusing to watch Merle’s rage stymied by a word from the Guv. Rooker seems to have matured Merle at least a little bit, because he seems much more restrained. Wouldn’t old racist Merle have killed Michonne on sight just for the hell of it? But I am eager to see how Merle reacts to seeing little brother Daryl again – especially a Daryl aligned with the people responsible for the loss of his hand. It appears that Merle has grown a bit, understanding that he has to dial back his anger to survive in Woodbury. But it cannot last. Ol’ Merle’s true colors (pun intended) will come out.

So what’s up with the Governor ogling all those heads in fish tanks? TWD executive producer David Alpert told TALKING DEAD that he thinks the governor is trying to desensitize himself to the horror of the “biters.” Being a leader in this world means you have to do some extreme stuff, so he’s training himself to stomach that sort of thing. Alpert is probably telling at least some truth here. He added that Dr. Milton is sort of picking up where Dr. Jenner left off in the first season, studying the walkers and trying to learn about this world and how to survive in it. They’ve had almost a year to get over the shock and horror, so now Milton is trying to understand it.

This is the first episode of the entire series to not feature Rick (Andrew Lincoln).

The good people of Woodbury call the zombies “biters,” rather than “walkers.”

There are 24 heads floating in the Governor’s fish tanks. So who says there’s nothing good on TV?

Apparently Michonne’s pets used to be people who meant something to her – and yet she hacked off their heads with little (outward) remorse.

What sickness is Andrea suffering from?

Milton seems to know stuff about the biters that he’s not telling the Governor. I just get that vibe from the way Roberts is playing him – somewhat slippery and sleazy.