Attention, everyone: The Ricktatorship is in full effect! Rick is totally in charge, and if you don’t like it, there’s the door. Mind the walkers, tho. 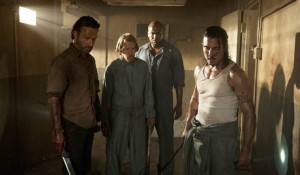 The episode picked up directly from last week’s amazing ending: With our friends trying to keep Hershel (Scott Wilson) from bleeding out after Rick (Andrew Lincoln) chopped off his leg.  Meanwhile, the surviving band of prisoner looked on in confusion at these interlopers, who didn’t even seem to care about them; they were all focused on Hershel. Once he was stabilized, Rick met with the prisoners, who had trouble accepting that civilization had fallen. Tomas (Nick Gomez) and Axel (Lew Temple) wanted Rick’s band to leave their cellblock, but Rick wouldn’t hear of it, pointing out that they spilled blood to capture the place. But a bargain was reached: In exchange for food and medicine, Rick would help the prisoners clear another cellblock.

Rick, Daryl (Norman Reedus), T-Dog (Irone Singleton) and Glen (Steven Yeun) try to explain how to killer walkers (go for the head), but when the prisoners are turned loose on some zombies, they treat it like a prison hit, trying to shiv the walkers in the torso. Still, the group promised to help, so they accompany the prisoners into D-Block. “Stay in attack formation, no more prison riot stuff,” Rick orders, warning them not to get mistaken for walkers. A major battle ensues. During the fight, Tiny (Theodus Crane) was scratched by a walker, so when it was over Tomas callously struck him down and pulped his head. Elsewhere, later, Glen helped Carol (Melissa McBride) capture a walker so she could practice cutting open the torso in case she needs to do a C-section on Lori (Sarah Wayne Callies). 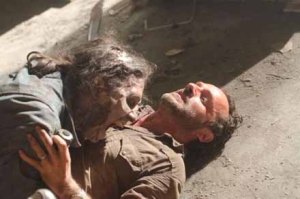 Later, when walkers attack C-Block, during the fight Tomas takes a swing at Rick with a machete and then threw a walker on Rick, knocking him to the ground! Daryl saved Rick, and after the zombies were repelled, Rick confronted Tomas, who feigned ignorance. But Rick knew what Tomas was doing, so he buried his machete in the middle of Tomas’ skull. Andrew (Markice Moore) freaked and tried to kill Rick, but ended up fleeing. Rick chased him into an unsecured zone, and when Andrew ran outside, into a yard filled with walkers, Rick closed and locked the door, leaving Andrew to his fate. Meanwhile, Daryl held the remaining prisoners, Axel and Oscar (Vincent Ward), in his sights. Rick decides to leave the prisoners here, alone in their new home.

Back in C-Block, Rick discovers that Hershel had briefly stopped breathing, but Lori brought him back. Hershel awakens, still human, and celebrates with his daughters. But he reaches out a hand to bond with Rick. Later, Rick thanks Lori for bringing Hershel back. Meanwhile, Carol practices her surgery – unaware that she is being watched by someone hidden in the woods.

As the episode began, I was a bit amused that Rick and crew (except for wary Daryl) ignore the prisoners and work on Hershel. They only care about him, not Tomas and his gun. Then, as quickly as they arrived, they bug out, leaving the inmates with Hershel’s leg and lot of questions.

We got some useful information during a subsequent conversation with the inmates – namely that it has been 292 days (294 by Axel’s count) since the zombie outbreak at the prison, and that Rick believes half the population of the USA has been wiped out – maybe more. 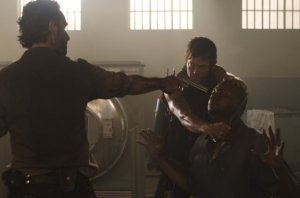 The dramatic and emotional highlight of the episode came when Maggie (Lauren Cohan) told her unconscious father that it was OK for him to give up the fight, and rest. Cohan was devastating as the stricken Maggie. Of course she didn’t want her father to die, but she also appreciated everything he had endured for her, and wished he could find some relief. It’s a terrible world now, and his fighting to come back would only extend his time in this hell on Earth.

But Hershel did come back, and his gesture of forgiveness to Rick was silent but powerful. Rick and the Greenes are an odd little family now, and Lori isn’t in the club. In fact, Lori isn’t anything anymore. Is Rick that mad at her, or has his humanity been so degraded that he can no longer make emotional connections with other people? Lori insisted that Rick is not a killer, but he did brain Tomas and lock Andrew in the yard. He probably locked Andrew outside because Rick could then tell himself he gave the guy a chance, and even if he gets eaten, it was the walkers that took him, not Rick. The reason I think Rick still retains his humanity is the way he hesitated after closing the door on Andrew. He knew what he had just done, and he understood that it was same as planting a machete in his skull.

It may be ironic, but Rick has actually come around to Shane’s way of thinking. Shane was all about making the hard choices, the cold, calculated choices that make the difference between life and death. That’s what Rick is doing; he forced the guys to help him fight their way into the prison last week because he thinks the building represents the “safe haven” he’s been searching for. Also, and more importantly, Rick is making decisions about who deserves to live or die. He evaluated Tomas and decided he was a threat to the group’s survival, so Rick killed him. The former sheriff is now judge, jury and executioner. His sentence for Andrew was similar: death by walker. And Rick decided that Axel and Oscar would live in D-Block, leaving them without weapons or any way to really defend themselves.

Rick is the Man, now, even as his humanity is cast into doubt by his actions. But everything Rick has done has been for the good of the group. 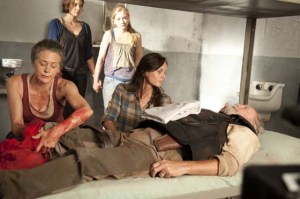 Carol is hard-core now, putting that rebar through the female walker’s eye like she was threading a needle. And who is watching Carol from the woods?

Looking at the dead in their cells, Oscar said, “I know these guys. They were good men.” Well, “good men” for prison inmates, I guess.

Carl (Chandler Riggs) continues to mature and get more interesting as he takes on more and more responsibilities. In this episode, he guarded the gate, and on his own initiative, found the infirmary and cleared it of useful supplies and brought them back. For that, he earned a scolding from Lori. Carl tried to argue, but that just got him a rebuke from Beth (Emily Kinney), on whom he has a crush.

QUOTES OF THE WEEK:

“I know I’m a shitty wife, and I’m not winning any mother of the year awards,” – Lori to Rick

“You better run,” – Rick to Andrew