The first image makes me think the Black Oil is crossing over from THE X-FILES, but that doesn’t seem very likely. I think my favorite image is the fourth one, with the woman clinging, spider-like, on the underside of the stairs. These still images certainly live up to the standard set by the series of creepy teaser clips that have already been released.

The second coming of AHS picks up with a new story and new characters and is set in an institution for the criminally insane apparently operated by nuns. And even though Jessica Lange and Zachary Quinto are returning from last season, they are playing new characters. The new cast includes Franka Potente (The Bourne Identity), singer Adam Levine of Maroon 5 and NBC’s THE VOICE, James Cromwell (Babe), Joseph Fiennes (FlashForward), Chloë Sevigny (BIG LOVE) and Chris Zylka (still visible in some theaters as Flash Thompson in The Amazing Spider-Man).

I’m the type of fan who doesn’t mind knowing a bit about upcoming episodes of my favorite shows; I just don’t want to know everything. Thanks to my previous job at Soap Opera Weekly, I got used to knowing what was coming more than two weeks ahead of time, and often I saw prime-time shows way before the rest of the home audience. I thought that was cool.

BCC America have posted official synopses of the first three episodes of Series 7, which kicks off on Saturday. These won’t ruin the episodes for you, but if you want to avoid knowing anything about what’s coming up, you should skip today’s post. (I won’t be offended. Promise.) 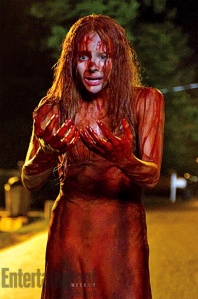 I’m not thrilled about the remake of Carrie because I feel it’s just unnecessary; the Brian DePalma-directed original was well-done and sticks in the minds of anyone who has seen it. The only “justification” for filming the story again would be to stick closer to Stephen King‘s original novel — which is what I have been hearing about the reboot.

The other big plus for this version is the cast. I really think Chloë Grace Moretz is a talented young actress with a bright future ahead of her, and at age 15, she is perfect casting for the world’s most famous troubled teen, Carrie White. And no one can argue with Julianne Moore being in anything. Here, she will play Carrie’s religious-fanatic mother, Margaret. Moore is always a highlight of anything she is in, and her Oscar will be coming someday. (Er, I don’t expect it from this movie; but one never knows.)
END_OF_DOCUMENT_TOKEN_TO_BE_REPLACED 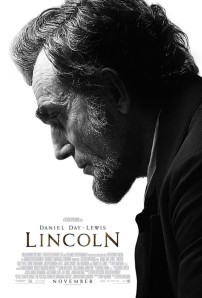 Of course you’ve heard of that holiday-season prestige project that’s expected to snap up a bunch of Oscar nominations (and wins) when it is released in November — a little picture called Lincoln, starring Daniel Day-Lewis and directed by a guy named Steven Spielberg. Awards bait, for sure.

I mean, just look at this initial teaser poster: It’s packed with so much… gravitas… that I imagine it would be difficult to hang on a wall because it’s so heavy and serious.  This is clearly “a film by,” and not some popcorn romp. There’s nary a mention of his other career as a slayer of vampires!

Look at DD-L, all grim, as if the weight of preserving the Union is on his shoulders. He’s alone — that stark white background tells us he’s on his own — and it’s in black-and-white, which means it’s Serious. Plus, he’s pretty much struck the same profile pose as on the penney, so you know it’s him.

Coud you imagine if the Lincoln teaser had been handed over to one of the hack publicity firms? We surely would have gotten the image of Lincoln’s disembodied head (colored blue, of course) floating over a generic Civil War battle scene, with maybe Mary Todd Lincoln’s head and a male supporting character’s floating below and behind Lincoln while a jagged bolt of orange light slices down the poster vertically. The log line would be something insipid but deep-sounding: “The war that tore his country apart almost tore the president apart.”

I don’t know… maybe you can think of something better?

We all know that when the seventh series of DOCTOR WHO kicks off on Sept. 1, we will be watching the final five episodes featuring Amy and Rory as the 11th Doctor’s companions, and it will be a sad time for all.

However, starting Monday, the BBC have cooked up a way for us to spend a little more time with the Ponds being the Ponds. The web series Pond Life will let fans hang with the couple and see what happened off-screen between the end of Series 6 and the start of the new season with “Asylum of the Daleks.” What exactly do Amy and Rory get up to during their down time?

But don’t my word for it; see what Karen Gillan and Arthur Darvill have to say:

END_OF_DOCUMENT_TOKEN_TO_BE_REPLACED

After all this time, all this hemming and hawing, tossing around names and rumor-mongering, the best the-powers-that-be at The Hunger Games: Catching Fire could come up with is casting Sam Claflin in the important role of Finnick Odair?

Seriously? We waited all this time for… Sam… Claflin?

You might remember Claflin for his small role as the replacement pretty boy when Orlando Bloom skipped The Pirates of the Caribbean: On Stranger Tides, or as the prince in Snow White and the Huntsman. Oh, who are we kidding — he wasn’t the least bit memorable in either role. I thought his character was weird in the pirates movie — a missionary who kinda sorta falls in love with a mermaid, and the only thing I can recall about his prince in Kristen Stewart’s movie was that he played the grown-up version of the kid who grew up with Snow.
END_OF_DOCUMENT_TOKEN_TO_BE_REPLACED 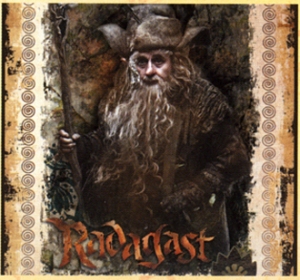 This is supposed to be an image of McCoy in costume as wandering wizard Radagast the Brown from The Hobbit, but it looks more like a hostage note — with images clipped out of magazines instead of letters.

I know this is merchandise not the movie, but the Hobbit 16-month wall calendar (from which this image comes) was authorized by Peter Jackson’s people and produced by Warner Bros (no slouches), so the fact that this amateurish snip-and-paste job was approved makes me worry about the movie.
END_OF_DOCUMENT_TOKEN_TO_BE_REPLACED