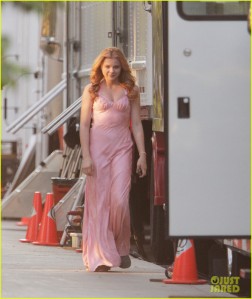 Looking at these latest behind-the-scenes photos from the forthcoming remake of Carrie, I suddenly realized how attractive the powers-that-be are making Chloë Grace Moretz’s version of the character, in contrast to Brian DePalma’s 1976 film version and especially compared to the fat, acne-ridden character as written in Stephen King’s debut novel.

A few weeks back, we saw Chloë in her character’s wardrobe of an ill-fitting, dull-colored dress and sweater, and also a black one-piece swimsuit. Her hair is also drab, but it’s not a rat’s nest of tangles. Yes, those were not the clothes of a hip young woman, but they don’t make Carrie look like a misfit.

Of course, the shots of Chloë leaving her trailer and walking to the set are for Carrie’s appearance at the prom, hence the more flattering attire. 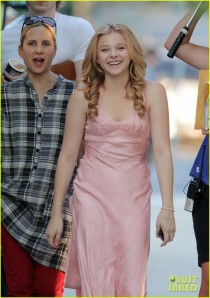 I don’t even get an “outsider” vibe from any of these pics. If the plot of this movie is to follow the book, “in crowd” of students torment her for religious beliefs. I can also see her as “left out” when her strict religious upbringing compels her to skip parties and group outings. Due to her mother’s bullying, Carrie might feel like she has no choice but to decline social invitations, so she could be plenty conflicted about being left out by her (more or less) own choices.

Also, look like she does, Carrie must have been noticed by at least some of the male population at the school, even if her clothing looks like Amish leftovers. Somebody must have an eye on her, even if she is shunned as some kind of weirdo.

I’m kind of surprised director Kimberly Peirce is letting Chloë stay blonde in the role. Blondes are usually shorthand for good or victimized characters. She’s also looking pretty when I had expected them to at least try to make her “Hollywood ugly” — give her glasses and dark, pulled-back hair (in the tradition of teen trash like She’s All That as well as many an “ugly duckling” rom-com). But no; Carrie is going to have to go through the whole movie looking like Chloë.