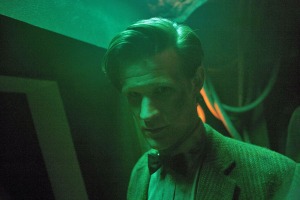 …at least, not as part of some grand 50th-anniversary story next year, that is…. Matt Smith seems to be of the opinion that show-runner Steven Moffat is not about to do something as obvious as an anniversary regeneration story.

“We want to make [the anniversary] as big and bold and as brilliant as we can because, we hope, it can be one of the monumental bits of TV history,” Smith told us. “But I doubt there’ll be a regeneration … “

Which is good great news as far as I’m concerned, because I absolutely adore Matt’s portrayal of the Doctor, and I’m seriously sweating him being “forced out” of the role by a contrived regeneration shoehorned into a “50th anniversary” story just because fandom assembled assumes that would make the tale “special.”

Matt had earlier hinted that he was going to continue in the role through 2013 and then play it by ear each year after that. But at the press launch for “Asylum of the Daleks,” he seemed to backpedal a bit, saying:

“I don’t know where this talk of the 2014 contract came from … I haven’t signed anything new.”

I think the key here is Matt’s carefully precise wording: “I haven’t signed anything new.”

So… what if his previous contract already included 2014? So it’s not necessary for him to sign anything new to continue in the role. 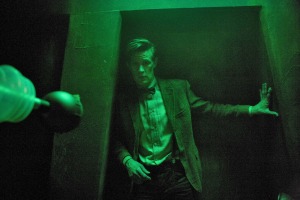 But even if he is sticking around, that doesn’t mean he knows what’s going to happen with the show in its 51st year. “Steven will tease you right to the end, because that’s what he does to me,” Matt said.

Remember, the Doctor lies — and so does the Grand Moff. But Matt always seems to be on the level with us fans, and I could totally see him being in the dark about Steven’s plans beyond the bold strokes. In fact, didn’t Matt say something very like that just a little while ago — that Steven told him in very vague terms where the series is going after the anniversary?

Well, wherever/whenever that is, it’s all just pure speculation at this point.