This is a cool find first noted by the good folks over at i09… a vaudeville-era warning about the dangers of drink and consorting with men who… play cards! 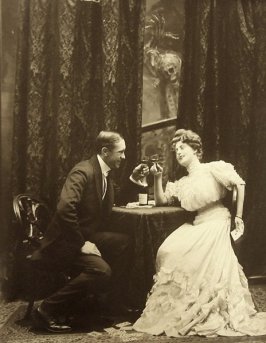 In 1906 The Journal of the English Folk Song Society published a piece on the old English ballad “Death and the Lady.” Some enterprising female entertainer encountered the article and realized the story might be used as a great vaudeville piece about the evils of card play and alcohol […] Here Joseph Hall, the Brooklyn born photographer who had made a career on baseball pictures and theatrical production stills, captured the sequence of the action, providing a peculiarly detailed & rare view of the progress of a single vaudeville performance.