Just chop off my head now…

I somehow managed to miss this information when it was announced, and remained blissfully unaware for almost two weeks, but it has finally ruined my day: Ryan Reynolds will star in the (completely unnecessary) reboot of Highlander. Reynolds will play Connor McLeod, a 16th-century Scotsman who discovers that he one of a dwindling race of immortals fated to fight amongst themselves until only one of their number is left.

The 1986 original film was directed by Russell Mulcahy (who never again did anything worthwhile, in my book) and starred Frenchman Christopher Lambert as the Scottish Connor, and Scotsman Sean Connery as an Egyptian masquerading as a Spaniard, Juan Sanchez Villa-Lobos Ramirez. The Immortals can only be killed by decapitation, and they were compelled to battle each other through history until only one remained. The winner obtained “The Prize” — mortality and the ability to sense the thoughts of everyone in the world.
END_OF_DOCUMENT_TOKEN_TO_BE_REPLACED

What we have all feared has come to pass: In a shameless, cynical money-grab, Lionsgate has announced that Mockingjay, the third novel in Suzanne Collins’ acclaimed YA trilogy, will be split into two movies, with The Hunger Games: Mockingjay Part One slated for release on Nov. 21, 2014, and Part Two penciled in for Nov. 20, 2015.

After all, the Harry Potter series and Twilight both split their final books, so in the monkey-see, monkey-do world of Hollywood, The Hunger Games has to do it, too. If nothing else, the producers probably feel they’ll get a good opening-weekend gross from Part Two.
END_OF_DOCUMENT_TOKEN_TO_BE_REPLACED 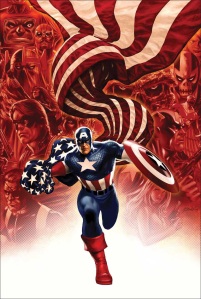 Now that DC Comics has had a year to shake down its “New 52” company-wide relaunch, Marvel is poised to get into the act with its own rebranding, called “Marvel NOW!”

It looks like things start hitting the fan in October when, according to solicitations, Marvel cancels nine titles — including some surprising ones — and launches a new flagship comic and a movie tie-in miniseries.

Philip Seymour Hoffman has officially signed on the dotted line to appear in The Hunger Games: Catching Fire — and, presumably, The Hunger Games: Mockingjay, parts 1 and 2, according to Lionsgate Films. Hoffman will portray Plutarch Heavensbee, the new Head Gamemaker who takes over after the debacle that was Seneca Crane’s 74th Hunger Games (in the first movie). Plutarch has the task of creating the 75th Hunger Games, which will be a special Quarter Quell.

The casting means at least one Oscar winner will appear alongside Oscar nominee Jennifer Lawrence’s Katniss Everdeen in the first sequel to The Hunger Games. Production on the follow-up is set to begin in September for a November 2013 release, so additional casting should be coming quickly now.
END_OF_DOCUMENT_TOKEN_TO_BE_REPLACED

I’ve always looked at director Guillermo Del Toro’s Pacific Rim with a jaundiced eye; to me, it was the project Del Toro turned to after Universal got cold feet and pulled the plug on At the Mountains of Madness, his big-budget adaptation of H.P. Lovecraft’s classic tale of atmospheric horror at the bottom of the world. If he was working on PR, then he wasn’t available for ATMOM if the project were suddenly funded.

Back in 2011, Universal was frightened by the $150 million Del Toro needed to do ATMOM properly. Of course, ATMOM was only possible because Del Toro’s two years of hard work prepping to direct The Hobbit went down the drain when New Line Cinema and MGM couldn’t settle on a start date and forced him off that project in May 2010. And did I mention that ATMOM was supposed to star none other than Tom Cruise?
END_OF_DOCUMENT_TOKEN_TO_BE_REPLACED

This is almost too cool to wrap your head around: This is a photo of a single atom casting a tiny shadow! How tiny? Real tiny: less than a millionth of a meter long!

Big objects (like people) cast shadows by blocking photons of light, whereas little things (like atoms) cast a shadow by absorbing photons from light — but only very specific wavelengths.

The atom is Ytterbium (Yb), captured via ion trap by scientists at Griffith University in Australia. They shone a specific wavelength of light (one Ytterbium can absorb) on their captive, and a light sensor found empty space in the light where the atom had absorbed photons, resulting in a shadow.

AMC’s horror hit THE WALKING DEAD is expected to have a big presence at Comic-Con International: San Diego 2012 later this week, and this poster is supposed to be part of it — unfortunately.

This poster is very disappointing on a couple of levels: First, and most obviously, this is one sad excuse for a Photoshopped image. As usual, it’s blatantly obvious that the heads are pasted on (they are different sizes and lighted differently than the bodies). And who is that poor chap on the right? Is that… the Governor? Wow, it doesn’t look like David Morrissey at all. It took me a few moments to figure out it’s supposed to be him. And then there’s Michonne: Apparently actress Danai Gurira has an incredibly short torso — or maybe just a ginormous head and superlong arms?

Secondly, the image gives no real sense of what the new season will be like, beyond featuring a couple of new characters. Granted, it’s main purpose is to inform con attendees of where to find panels and autograph sessions, but still — would it have killed AMC to include more of the prison than just a chain-link fence?

Don’t get me wrong, this poster is dampening my enthusiasm for the show; I just wish it had tried to do more to whip up excitement in other people.

Now we’re getting some meaty stuff on the upcoming third season of AMC’s THE WALKING DEAD. Here’s a gallery of new promotional images:

Michonne and Merle! October cannot get here fast enough, can it? 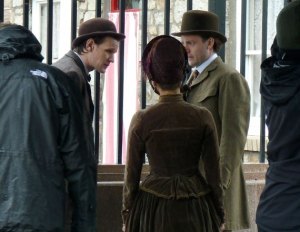 If you don’t want to know, please don’t read this entry. I’m using this relatively uninteresting shot of the Doctor in a bowler and Clara with her back to us in order to fill the page, so I can save the good pics for the next page…
END_OF_DOCUMENT_TOKEN_TO_BE_REPLACED

The advertising campaign makes Ted look like The Hangover with plushies, and you can easily imagine frat-boys dragging unwilling dates to a raunch-fest, only to be confronted by a chick flick in wolf’s clothing. Don’t get me wrong: This movie packs in all the vulgar language it possibly can, up to and including the C-word — which is used by a female character — and there’s plenty of drinking and bong-hits and crude humor, but there’s no nudity. Unless you count bare… emotions.
END_OF_DOCUMENT_TOKEN_TO_BE_REPLACED