Looper is about Joe, a hit man who takes kill orders from mobsters in future who send their victims back in time to be executed in the past, where no evidence will be recovered. Then, one day, Joe (Gordon-Levitt) is ordered to kill his future self, played by Willis! 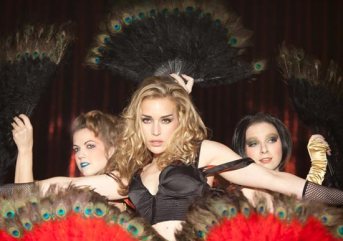 Why the time-travel gimmick? Johnson summed up the appeal of temporal tampering:

“One of the basic appealing things about time travel is being able to step out of this tiemeline we’re all chained to, of birth to death and “this is the time you’ve got and that’s it.” So there’s soemthing about cheating that’s at the heart of the appeal that makes time travel this shiny object that we love considering in our heads. So there’s something illicit about it, something that feels at its core like you’re cheating something, like you’re getting out of what you’re supposed to have. It also is just the perfect way to steal something, from Time Bandits onward, to drop out of the sky and grab Napoleon’s shit and then disappear again.”

Looper doesn’t open until Sept. 28, but I’m sure it will be worth the wait.

It’s an annual thing: The Academy of Television Arts & Sciences releases its list of prime-time Emmy nominations, and the rest of world clutches its pearls and bemoans the injustice of Undeserving Show X getting a nod over Deserving Show Y. There is much wailing and gnashing of teeth, then the trophies are doled out, and we do it all again next year.

Here then, is the 2012 edition of Prime-Time Emmy Nomination Angst.

Once again, I am sorely disappointed in the laziness of the Academy. There are so many repeat nominations that it once again looks like Emmy voters sent in last year’s ballots with a couple of extra names penciled in. The entire cast of MODERN FAMILY again? Seriously? Nothing from The CW again? Seriously? No major nominations for genre shows other than GAME OF THRONES again? Seriously? (See? Mindless repetition is not always fun, is it?)
END_OF_DOCUMENT_TOKEN_TO_BE_REPLACED

One upcoming movie that definitely was nowhere near my radar was Oz: The Great and Powerful. But it is now.

Directed by Sam Raimi (who took up this fantasy project after deciding to scuttle Spider-Man 4), the movie has an impressive cast: Mila Kunis, Michelle Williams, Rachel Weisz, Abigail Spencer and James Franco. The… well, let’s call him… eccentric… Franco plays Oscar Diggs, a small-time carnival hustler who is swept to the magical land of Oz by a tornado. There, instead of new sheep to fleece, he encounters three witches and must find the kernal of good within himself and become a great and powerful wizard for real.

The story sounds rather pedestrian to me, but what captured my attention was this terrific trailer. I love the black-and-white opening and the switch to color when Oscar lands in Oz. Hmmm, it reminds me of something, but what?

Very interesting clip of Steven Moffat and Caro Skinner at Comic-Con International: San Diego 2012 from the good folks at Airlock Alpha that touches on the immediate future of DOCTOR WHO and, hopefully, will finally put a stake through the heart of those false rumors about a big-budget movie with its own Doctor and continuity…

I’m very excited to hear Moffat say the show isn’t going anywhere after the 50th anniversary. There had been some worry in fandom that the series might be wrapped up by — or even negated by — the big story the Grand Moff has in mind. Thankfully, that isn’t happening.

Of course, just because DOCTOR WHO will go on, that doesn’t necessarily mean Moffat and Matt Smith (The Doctor) will continue along with it. The lead writer and executive producer of course has said nothing about his (or Matt’s) plans for the future, but who knows what will happen. But at least we know what won’t happen: a movie.

It would that DOCTOR WHO head writer and executive producer Steven Moffat really does have big plans for the 50th anniversary of the series next year. Specifically, he wants to answer the biggest, longest-running and most important question in the history of the show: Doctor Who?

Just what is the Doctor’s name? We know the title/moniker he regularly goes by (The Doctor); we know several of his aliases (Dr. John Smith, Doktor von Wer, and plenty more); we know his nickname at university (Theta Sigma, or Thete); we know the Second Doctor once signed a note “Doctor W”; we know the 11th Doctor claimed his middle name was “Bad Penny” (in “The God Complex”), but he was almost certainly joking. We’ve even seen his name written down — in his native language. However, we do not know his birth name.
END_OF_DOCUMENT_TOKEN_TO_BE_REPLACED

Here are some pretty cool pieces of art from Comic Con International: San Diego 2012, promoting upcoming projects that I am looking forward to…

Guardians of the Galaxy was an excellent recent comic book series that I really enjoyed. It told some really great, huge space-opera stories that had the cosmic heft necessary to be take seriously as epics. I was stunned when this was announced as an upcoming live-action film — but also happy. This concept art shows (from left) Drax the Destroyer, Groot, Star Lord, Rocket Raccoon and Gamora.
END_OF_DOCUMENT_TOKEN_TO_BE_REPLACED

Thanks to Comic-Con International: San Diego 2012, we know have a couple of more episode titles from the seventh season of DOCTOR WHO, including the second one — which show-runner Steven Moffat had previously dubbed “the best name of anything, ever.” That moniker: “Dinosaurs on a Spaceship,” according to the BBC.

END_OF_DOCUMENT_TOKEN_TO_BE_REPLACED

Well, the Comic-Con International: San Diego 2012 poster for THE WALKING DEAD events may have been weak, but the-powers-that-be bounced back strong with a four-minute clip that features lots of action and outlines the overall story arc for season three: Rick and friends take control of a prison and run afoul of a powerful man called the Governor, who runs a down that appears to be a safe haven from the walkers.

TWD is premiering early this year, returning to AMC’s schedule on Sunday, Oct. 14. 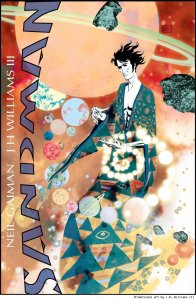 The best news to come out of the early days of Comic-Con International: San Diego 2012 was, by far, the announcement that the legendary Neil Gaiman is returning to Sandman — the character that made Neil’s bones in the industry — with a brand-new story to be drawn by J.H. Williams III.

The tale — which will appear in November 2013 — will be a prequel that explains what happened just before the original Vertigo series The Sandman kicked off waaaaay back in November 1988. Neil himself said:

“When I finished writing The Sandman, there was one tale still untold. The story of what had happened to Morpheus to allow him to be so easily captured in The Sandman #1, and why he was returned from far away, exhausted beyond imagining, and dressed for war.”

The picture here is the teaser bit of art J.H. did to promote the project. It’s offbeat, and I think I like it. (One thing about Morpheus: His appearance does tend to… well, morph…) BTW, November 2013 marks the 25th anniversary of The Sandman No. 1, so that’s auspicious timing.
END_OF_DOCUMENT_TOKEN_TO_BE_REPLACED

Comic-Con International: San Diego 2012 has come up with the first bit of good news for Browncoats in as long as I can remember: The creators of the cult series Firefly will gather for a 10-year reunion in San Diego — and the Science Channel will tape it for a one-hour special to air on Nov. 11.

I know what you’re thinking: The Science Channel? Well, they’ve been airing reruns for the last year or so, and piling up gangbuster ratings, so they figured it was worth the investment to dish up a little treat for its loyal Browncoats.
END_OF_DOCUMENT_TOKEN_TO_BE_REPLACED