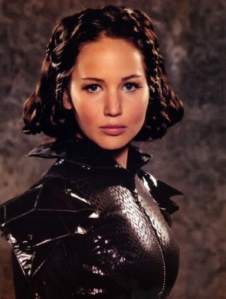 What we have all feared has come to pass: In a shameless, cynical money-grab, Lionsgate has announced that Mockingjay, the third novel in Suzanne Collins’ acclaimed YA trilogy, will be split into two movies, with The Hunger Games: Mockingjay Part One slated for release on Nov. 21, 2014, and Part Two penciled in for Nov. 20, 2015.

After all, the Harry Potter series and Twilight both split their final books, so in the monkey-see, monkey-do world of Hollywood, The Hunger Games has to do it, too. If nothing else, the producers probably feel they’ll get a good opening-weekend gross from Part Two.

I am at a complete loss as to how they are going to pad the story-light novel enough to make two movies. There will have to be so much original material that fans might consider revolt themselves! What are they going to do — follow Katniss’ every dull move in detail every day, just like the first half of the book? But then, what about the second part? You know what happens there…

Where would the split come? There is no natural break in the story — it was widely rumored that Collins was pressured by her publisher to finish Mockingjay as quickly as possible, which is why it is such a choppy, rotten read. There are a couple of places to wedge in an artificial break, but it will certainly feel forced. Perhaps the filmmakers will decide to expand the world a bit, and show what’s going on with the other characters – like show exactly what, say, Gale is up to, or give a glimpse into what’s happening to Peeta, or… anyone else besides Katniss, really.

But there’s nothing fans can really do — except refuse to see Part Two (yeah, right…) — so, the producers are pretty much like the Capitol: telling fans what they’re gonna get, and they better like it!

But those movies are still a couple of years off. Lest we forget, The Hunger Games: Catching Fire is about to begin shooting in just a few months, with Kauai, Hawaii, chosen as the location for… well, you know what will be shot on tropical beach and jungle locations…

Still no confirmation on Jena Malone being anointed Johanna Mason, but there also have been no contrary reports about anyone else landing the gig. Keep those fingers crossed, Jenaphiles!

In the thrilling sequel The Hunger Games: Catching Fire, Katniss Everdeen and fellow tribute Peeta Mellark have barely returned home after winning the 74th Annual Hunger Games when they are whisked away once again by the Capitol. Forced to leave her family and best friend Gale, Katniss is dispatched on a victory tour of Panem with Peeta, where rebellion is seething in all 12 districts. The Capitol is enraged and ready to strike back… as President Snow prepares the most diabolical edition of the Hunger Games yet.