I’ve always looked at director Guillermo Del Toro’s Pacific Rim with a jaundiced eye; to me, it was the project Del Toro turned to after Universal got cold feet and pulled the plug on At the Mountains of Madness, his big-budget adaptation of H.P. Lovecraft’s classic tale of atmospheric horror at the bottom of the world. If he was working on PR, then he wasn’t available for ATMOM if the project were suddenly funded.

Back in 2011, Universal was frightened by the $150 million Del Toro needed to do ATMOM properly. Of course, ATMOM was only possible because Del Toro’s two years of hard work prepping to direct The Hobbit went down the drain when New Line Cinema and MGM couldn’t settle on a start date and forced him off that project in May 2010. And did I mention that ATMOM was supposed to star none other than Tom Cruise?

Anyway, Legendary Pictures was happy to have Del Toro aboard PR, and production started right away, about a year ago. I recall that Pacific Rim was lauded – in an apparent nose-thumbing at Universal – as big: big monsters, big effects and big budget. But I still had a chip on my shoulder about it.

Originally, all we knew was that PR was supposed to be homage to huge disaster movies with Earth under some kind of threat and needed to develop technology to fight it. And then it became homage to kaiju movies, with something approximating a Godzilla storyline. Then we learned that the movie would feature many kaiju. And giant robots. Fighting kaiju. Monsters vs. mecha. With a proper budget, and a director who knows what the hell he’s doing. 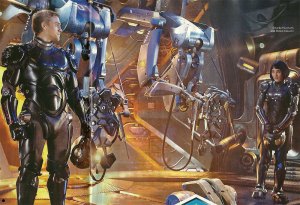 The synopsis from Legendary and Warner Bros describes the flick thusly:

“When legions of monstrous creatures, known as Kaiju, started rising from the sea, a war began that would take millions of lives and consume humanity’s resources for years on end. To combat the giant Kaiju, a special type of weapon was devised: massive robots, called Jaegers, which are controlled simultaneously by two pilots whose minds are locked in a neural bridge. But even the Jaegers are proving nearly defenseless in the face of the relentless Kaiju. On the verge of defeat, the forces defending mankind have no choice but to turn to two unlikely heroes – a washed up former pilot (Charlie Hunnam) and an untested trainee (Rinko Kikuchi) – who are teamed to drive a legendary but seemingly obsolete Jaeger from the past. Together, they stand as mankind’s last hope against the mounting apocalypse.”

Epic. So there I was, onboard with Pacific Rim. A great premise and a great director who had never made a bad film (some were much more successful than others, but none was actually bad). And At the Mountains of Madness was clearly not happening no matter how much Del Toro (and I) wanted it to happen. That was off the table.

And then, last week, I saw that poorly Photoshopped image of the two lead Jaeger pilots – played by Hunnam and Kikuchi. Their heads looked totally pasted-on (yeah!). And Hunnam did not look like a grizzled veteran so much as a kid who might have cut himself shaving for the first time.

But now, in the lead-up to Comic-Con International: San Diego 2012, we get the first poster for Pacific Rim, and it’s a winner. It has the gravitas and sense of scale to say, “This is a movie about big robots. And by ‘big,’ we mean BIG.” The birds flapping around the Jaeger’s shoulders really do the heavy lifting when it comes to imparting scale – even more than the tiny human figures on the mech’s shoulders.

So there you have it: One of our most gifted fantasy directors – the man behind Pan’s Labyrinth, the Hellboy movies and The Devil’s Backbone – doing live-action anime. What could go wrong? 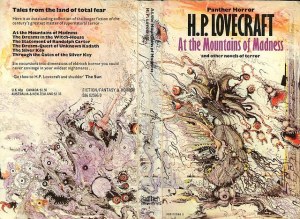 Addendum for those still interested in ATMOM, the last I heard that studios are so spooked by Disney’s self-immolation with John Carter that ATMOM will never happen with anything close to the actual budget needed. And, back in May, Del Toro suggested that Ridley Scott’s Prometheus had probably hammered the last nail into the coffin of ATMOM, because the two movies would be so similar in theme. He wrote on his message board (DelToroFilms.com):

“Same premise. Scenes that would be almost identical. Both movies seem to share identical set pieces and the exact same BIG REVELATION (twist) at the end. I won’t spoil it.”