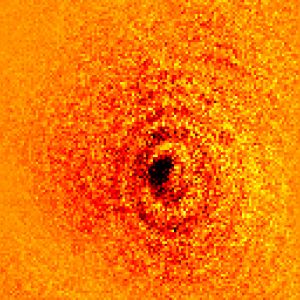 This is almost too cool to wrap your head around: This is a photo of a single atom casting a tiny shadow! How tiny? Real tiny: less than a millionth of a meter long!

Big objects (like people) cast shadows by blocking photons of light, whereas little things (like atoms) cast a shadow by absorbing photons from light — but only very specific wavelengths.

The atom is Ytterbium (Yb), captured via ion trap by scientists at Griffith University in Australia. They shone a specific wavelength of light (one Ytterbium can absorb) on their captive, and a light sensor found empty space in the light where the atom had absorbed photons, resulting in a shadow.