The advertising campaign makes Ted look like The Hangover with plushies, and you can easily imagine frat-boys dragging unwilling dates to a raunch-fest, only to be confronted by a chick flick in wolf’s clothing. Don’t get me wrong: This movie packs in all the vulgar language it possibly can, up to and including the C-word — which is used by a female character — and there’s plenty of drinking and bong-hits and crude humor, but there’s no nudity. Unless you count bare… emotions.

Ted opens with 8-year-old John Bennett, a friendless boy who makes a wish for a friend. And, thanks to Christmas Magic, his favorite stuffed animal, Ted (voiced by writer/director Seth MacFarlane), comes to life. And stays alive. John is now an adult played by Mark Wahlberg, and Ted is still his best friend in the world. Until John’s girlfriend, Lori (Mila Kunis; Meg’s voice on FAMILY GUY), wants more out of their relationship. And more John for Lori means less John time for Ted.

Aaaaand, cue the romantic comedy clichés (including the playful “paint fight” as they move into a new place — I’m not kidding). This is total chick-flick territory, but Wahlberg and MacFarlane give it an unmistakable masculine twist. Usually in a rom-com, the guy’s “wacky friends” don’t get personalities beyond “the Stoner” or “the Lothario,” but MacFarlane works hard to give Ted a vulnerable personality underneath the boorish exterior. He never comes close being fully rounded, but Ted’s narcissism at least seems endearing.

Wahlberg does some of the best work of his career as the overgrown child John — who is actually emotionally stunted. His soft voice and wide-eyed expressions really convey the idea of a boy in a man’s body. Wahlberg is loose and really throws himself into the role. You have to see him in a knock-down, drag-out fit with the little toy. Kunis, meanwhile, makes Lori seem like an attractive alternative to Ted. Often, “the girlfriend” is made into a harpy character the guy should never fall for, but here Lori feels authentic and tempting, even if she does want Ted kicked out on his furry butt.

Yes, Ted also plays out like an overlong episode of FAMILY GUY with the network censors tied up in the back room, since MacFarlane has packed the movie with FG writers, producers and actors — besides Kunis, Patrick Warburton (Joe) appears and Patrick Stewart narrates — but the humor is much more based in the story. There are no FG non-sequitur gags— “This is worse than that time I tried to…” or “Remember that time when…” — shoehorned into the script, and the movie is funnier for it.

I did think the flick could have been funnier; there’s even a feeling that it should have been funnier, but there are plenty of jokes to keep the story moving. Ted himself is very much a one-trick pony, so an audience would eventually tire of nothing by 90 minutes of a teddy bear smoking weed and ordering hookers, thus the love story is very necessary. And I did like that it took a very “John Hughes” turn in the final reel; MacFarlane never loses track of his cultural touchstones. 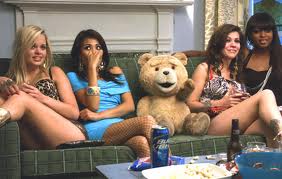 Speaking of which, if you are a fan of the 1980 schlockfest Flash Gordon, then Ted is a must, because that movie is revered by Ted and John. Even Ted’s score, by FG’s Walter Murphy, pays tribute to Queen’s immortal soundtrack, lifting whole passages. And the guest appearance by Sam J. Jones — Flash himself — is totally hilarious.

Ted fills the vital need for an R-rated comedy for grown-ups, and also serves as a sort of commentary on the box-office domination of animated films. Cartoons used to be made for grown-ups — that’s why Bugs Bunny is so sophisticated — and it would be great if adults could reclaim a slice of the animation market with more films like Ted.