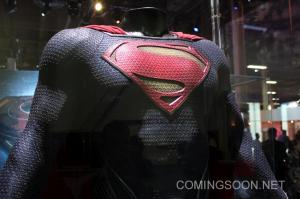 I am not exactly encouraged by these new images of costumes from Zack Snyder’s forthcoming Man of Steel movie. The outfits are on display this week at the Licensing Expo 2012 in Las Vegas.

The pattern that covers Superman’s (Henry Cavill) suit looks to me like it’s supposed to give the impression of those bumps you see on steel steps; kind of a literal “man of steel”? 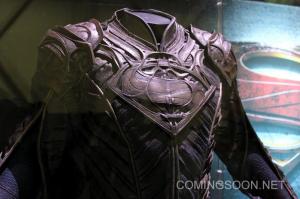 Jor-El’s (Russell Crowe) suit is kind of cool, I guess. It’s not supposed to be an inspirational outfit, and it has the look of ceremonial robes. The filigree on the shoulders and the chest plate is interesting. Also, notice how dull the color scheme is: brown and grey.

Lastly, we see Faora’s (Antje Traue) uniform. It’s a lot like Jor-El’s, suggesting that is also has its origins on Krypton. At least she seems to be sporting silver and grey.

General Zod’s (Michael Shannon) costume is going to be completely CGI-generated (just like the horrid Green Lantern costume), so he wore a gray motion-capture suit, just like Ryan Reynolds. Another bad sign…

But there is still time to set things right; Man of Steel doesn’t open until June 14, 2013.