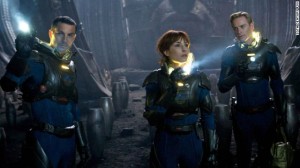 For a long time now, director Ridley Scott and co-screenwriter Damon Lindelof have been preaching that Prometheus has “Alien DNA,” but little did moviegoers suspect just how literal that description would be. I thought it meant the movie would have background elements that related to the 1979 classic’s universe that were not in-your-face; but, like the crew of the vessel Prometheus, I was wrong, so wrong.

The story begins in 2089 with a pair of scientists, Dr. Elizabeth Shaw (Noomi Rapace) and Dr. Charlie Holloway (Logan Marshall-Green) discovering ancient cave paintings that confirm their belief that an alien species (dubbed the Engineers) seeded human life on Earth and left a star map as an invitation to come visit the parent species when we became sufficiently advanced. Enter dying wealthy eccentric Peter Weyland (Guy Pearce), who funds Shaw and Holloway’s voyage 35 lightyears (about 205 trillion miles) into deep space because he wants to meet his maker before he dies. When the Prometheus crew arrive at their destination, what they find is nothing they expected.
END_OF_DOCUMENT_TOKEN_TO_BE_REPLACED