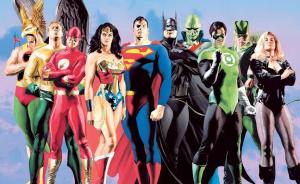 Are you sitting down for a shocker? Variety reported today that DC Comics is dusting off its Justice League of America project and trying to get it jump-started in the wake of the incredible success of Marvel’s own team movie, The Avengers.

I’m sure pretty much everyone saw this coming when The Avengers opened so strong, but as Iron Man, Captain America, Thor, Black Widow, Hulk, Hawkeye and pals continue to scramble up the box-office record list, JLA became more and more inevitable. And how ironic is it that Avengers helmer Joss Whedon once tried to get a Wonder Woman movie off the ground?

Of course superhero fans will recall that DC had been trying to get a JLA project off the ground several years ago and even had some actors attached — including Armie Hammer as Batman (Hammer went on to snag title character in Johnny Depp‘s The Lone Ranger movie.) Right now there are no actors associated with the project, and with Christian Bale maybe/possibly bailing on the current Dark Knight franchise, we will more than likely see a different actor under the cowl. Next year will see the release of Henry Cavill‘s Superman reboot, Man of Steel, so is he being eyed for JLA? Would Ryan Reynolds still play Green Lantern after the debacle of last year’s terrible Green Lantern movie?

All we do know at this point is that a screenwriter has been hired: Will Beal. He’s sort of the flavor of the month in Hollywood, after writing Gangster Squad, a period piece featuring Ryan Gosling, Josh Brolin, Sean Penn and a host of up-and-coming names. Beall was also tapped to write the in-development remake of Logan’s Run and reboot of Lethal Weapon.

Oh, and I think it’s safe to say we know JLA won’t be as good as Avengers. I mean, how could it be?