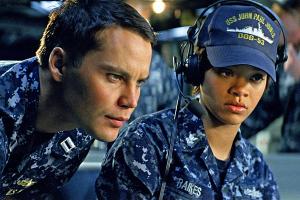 It’s easy to imagine the pitch that sold Battleship: “It’s the Transformers – at sea!” Clearly, Universal was blinded by the dollar signs in its eyes when this flick was greenlighted, because Battleship sinks under the weight of its own pyrotechnics.

Set in the Pacific Ocean off Hawaii, Battleship follows an alien invasion launched in response to a peaceful signal sent into deep space from Earth. (Damn those scientists!) An alien battle “fleet” of five ships lands (mostly) in the Pacific and sets up an impenetrable dome around Hawaii. Luckily, two U.S. Navy vessels and a Japanese ship are trapped within the exclusion zone, giving Earth a chance to fight back. Unluckily, our ships are massively outgunned by the aliens. The fate of the entire world is left in the hands of a few sailors led by Hopper (Taylor Kitsch), inveterate screw-up who is in the process of being court-martialed out of the Navy, a resentful Japanese captain, and… Rihanna.

My hat is off to the filmmakers for finding a way to incorporate the board game’s grid-firing guesswork. I won’t spoil how it happens, but it actually makes sense. Well, sort of. The other thing this movie does well is the look of the aliens. Sure, they’re mostly seen in generic battle armor that makes them look like robots, but what’s inside the suits shows that a little imagination went into their design, especially considering the creatures’ supposed home planet.

It’s everyplace else that the movie misfires, from its rambling scripting of the human characters to the choice of a generic incorrigible screw-up as the “hero,” the screenplay (which is credited to two people) was clearly the product of an action movie cliché checklist and a committee.

The special effects are serviceable for this sort of thing, and very closely resemble the glowing metal imagery of the interchangeable Transformers movies. My favorite bit was when two characters scrambled to the stern of a vessel in a virtual reprise of Jack and Rose’s mad dash in Titanic (I’m assuming it was intentional) while the CGI goes crazy all around them.

As for the acting… well, the movie attracted a surprising cast of recognizable faces, from Alexander Skarsgård (yes, from True Blood) to Liam Neeson, and then added non-actors Rihanna and swimsuit model Brooklyn Decker. Battleship missed a bet by giving Decker dialogue instead of a collection of swimsuits. Rihanna doesn’t embarrass herself as an actress, but her character is inexplicably everywhere, as is Jesse Plemmons’ Jimmy Ord — one moment he’s the starboard lookout, and the next Ord is the helmsman. What the? Skarsgård has a thankless role as the scolding older brother to Kitsch’s boneheaded character. The distinguished Neeson looks vaguely pained to be in this movie instead of hunting down someone and killing him with his bare hands. And because his character spends most of the action portion of this movie cooling his heels on the sidelines.

About the only person who acts like he belongs in this movie is Kitsch, who puts his all into his a role that would have been played by Bruce Willis in another age: the impossible-to-kill Man Who Keeps Coming Back. And Kitsch is the person I feel the worst for after this debacle. He was unfairly shackled to a bum rap for the underrated John Carter, but he deserves to take it on the chin for choosing this turkey. Unfortunately, with two big-budget albatrosses around his neck, Kitsch probably will spend a long time waiting to get another shot at a lead role, leaving the brutish and barely articulate Channing Tatum to take his place. Which is sad, because, Kitsch has the genuine charisma to be a leading man.

Battleship is Peter Berg’s worst outing as a director, because it is completely indistinguishable from a Michael Bay explosion-fest. And that is so very sad. Berg has shown sparks of being a terrific director with a human touch (Friday Night Lights) and an impishly twisted sense of humor, as in my favorite Berg movie, 1998’s Very Bad Things, which was sort of The Hangover before its time, with a darker vibe. But there is still hope for Beg, if he runs – very quickly – away from this action nonsense and does another small, personal picture.

I saw the movie chaperoning a group of boys from age 8-12, and they pronounced the flick “OK.” So, if you’re looking to occupy some boys for an afternoon, you’ll probably be all right. But my advice to other audiences, including adults, is to run away; or, should I say, “Abandon ship!”