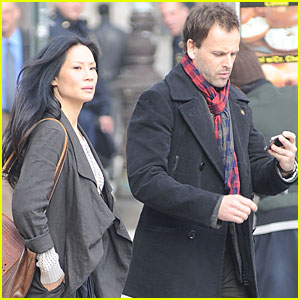 I am not happy to see that CBS has picked up the ELEMENTARY pilot for the fall. This is a series that transplants Sir Arthur Conan Doyle’s most famous creation to the present day, where he works as a consultant to the NYPD.

In other words, it’s just another “wacky crime consultant” procedural, to go along with THE MENTALIST, BONES, PSYCH, UNFORGETTABLE, WHITE COLLAR and probably a dozen other shows I’m forgetting to mention.

So what makes this especially egregious? ELEMENTARY is simply a rip-off of SHERLOCK, a British updating of the classic character that was launched a couple of years ago by DOCTOR WHO show-runner Steven Moffat and frequent WHO contributor Mark Gatiss. As ELEMENTARY was aborning, there were cries of “Foul!” and CBS responded by altering the gender of the Dr. Watson character to female and naming her “Joan Watson.” Oh, my, it’s an entirely different show! How lame. Notice that Jonny Lee Miller‘s Sherlock is wearing a scarf, just like Benedict Cumberbatch‘s Sherlock! No resemblance, right?

And here’s the kicker: According to SHERLOCK producer Sue Vertue (Moffat’s wife), CBS approached her company about remaking the series for the USA, but a deal could not be struck. When ELEMENTARY was announced, Vertue said:

We understand that CBS are doing their own version of an updated Sherlock Holmes. It’s interesting, as they approached us a while back about remaking our show. At the time, they made great assurances about their integrity, so we have to assume that their modernized Sherlock Holmes doesn’t resemble ours in any way, as that would be extremely worrying.

So, CBS cannot make a deal and then lo and behold, by some unrelated coincidence, the network comes up with a completely original series that just happens to have the same premise. CBS has clumsily sidestepped the issue by focusing on the idea that Doyle’s original stories are in the public domain:

Our project is a contemporary take on Sherlock Homes that will be based on Holmes, Watson and other characters in the public domain, as well as original characters. We are, of course, respectful of all copyright laws and will not infringe on any stories or works that may still be protected.

The problem with CBS’ hair-splitting, is that the stories in the public domain set Holmes’ adventures very firmly in the Victorian era, not modern NYC. Not by a long shot. I cannot imagine this will be the end of the controversy.

SHERLOCK has won boatloads of acclaim and awards back home in Britain, and the second series can be seen here in the USA on PBS stations. I wish ELEMENTARY nothing but the critical drubbing it deserves and a quick cancellation.